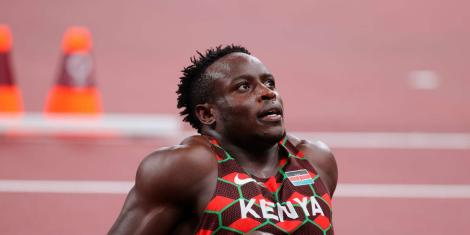 Omanyala, who has a world-leading speed of 9.85 seconds and an African record of 9.77 seconds over the distance, had beaten Abeykoon in the heats with a time of 10.23 seconds. After a time of 10.30, Abeykoon came in second in that group.

Omanyala finished in second place with a time of 10.14, compared to 10.06 for the winner. In 2020, Abeykoon, the current Sri Lankan national record holder, won in Dessau in 10.16, while Omanyala was competing for the first time in Germany.

On May 22, the two sprinters competed in separate groups in the 200 meters finals at the Castiglione International Meeting in Grosseto, Italy, with Omanyala winning in 20.50 and Abeykoon in 20.37.

Omanyala had won nine 100 meters races prior to Wednesday, en route to winning the Kip Keino Classic with the fastest time of the year of 9.85 at the Kasarani Stadium in Nairobi on May 7.

The 26-year-old athlete is getting ready for the African Senior Athletics Championships, which will take place in Mauritius from June 8 to 12. On May 31, he will fly to Ostrava Golden Spike in the Czech Republic before joining Team Kenya at Kasarani for a residential training camp.