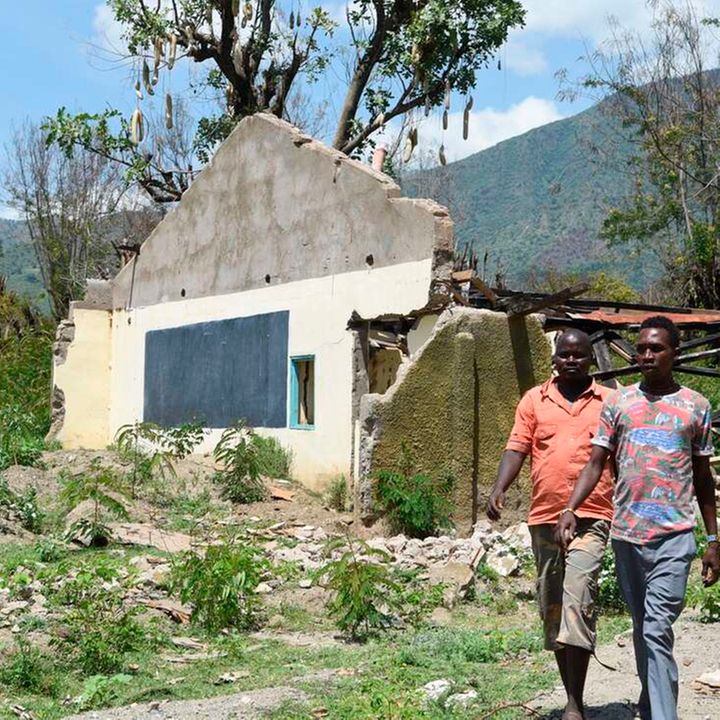 It was two days of misery, devastation, and panic.

And it came on what would have been Everlyne Kutoi’s best day: Market day.

As usual, the mother of four had woken up to sell her wares in her shop at Chesegon Market, eager to make the best out of the market day’s sales.

Then, in a flash, raging water from the nearby Embobut Forest came tumbling down, sweeping everything in its path.

Kutoi does not remember in what order the events unfolded. As she ran to safety, she recalls, she just couldn’t pick up the speed, as the waters — carrying huge boulders and mud — descended in the direction of her shop.

The shops were designed to be at the flattest part of Chesegon market, which was also the lowest part.

“Before I knew it, the heavy and fast-moving sludge and huge boulders rolling from the escarpment covered the lower parts of the market where our businesses were located. I tried struggling out of the rubble of my already collapsing shop, but it was too late,” narrates Kutoi.

Her shop soon gave in, the walls surrendering to the force of nature, taking her with them as they tumbled down.

Kutoi was swept downhill, through the village, for what she estimates to be five kilometres, clinging on to anything she could find.

She finally clung on to a huge tree trunk that had been felled by the water, and it was her home for two days.

Calling her survival miraculous, Kutoi says without the tree trunk, she would have been part of the 30 people who died in the landslide. Twenty-three of the bodies have never been found.

“I owe my life to a group of young people from the community’s rescue team who found me still clinging onto the tree two days later. Although I was weak, the rescuers were surprised I had not sustained any life-threatening injuries,” Kutoi tells the Nation team that revisited the tragedy this week.

A cold, hungry and shaken Kutoi was then taken to Kaboron Dispensary in the neighbouring Sigor Constituency, and later to Tot Sub-County Hospital in Marakwet East, where she was admitted for three days.

Although she lost her shop’s entire stock, which she estimates to be Sh30,000, she is grateful that she survived.

One year later, Kutoi has set up shop at a new market about a kilometre from where the old one was.

Where her shop once stood, there are now huge boulders that settled there as the land shifted down from Kipchumwa escarpment.

“Although the tragedy will be a permanent scar, I have moved on and set up this new shop dealing in second hand clothes and soft drinks to fend for my family,” she says.

Jebiwott Jepchumba was in her shop when she heard the deafening rumble from up the hill that day. However, she says, she was not moved, because she thought it was thunder.

“When I got out of my shop, I was horrified to see the ground moving downwards, towards the market. It is then that I realised all was not good and without hesitation, I joined the rest of the people in the market who were frantically rushing towards raised ground,” says Jepchumba, who owned a cereals shop.

The trader, who had to get many counselling sessions, says the landslide is by far the worst thing she has ever witnessed.

“Before last year’s disaster, we only used to hear stories of such a disaster, which happened during our forefathers’ times. It was such a long time ago that no person alive witnessed it to tell its magnitude, but we suspect it wasn’t as severe and as destructive as what we witnessed last year,” Jepchumba says.

Pokot elders who witnessed the Chesegon tragedy say environmental degradation due to agricultural activities and settlement along the escarpments loosened the soil that held the rocks together.

This weakened the entire escarpment and huge cracks developed on the escarpment during the long rains.

Chesegon, where the landslide happened, is on the border of West Pokot and Elgeyo Marakwet counties, with the Elgeyo Marakwet and Tugen Hills escarpments overlooking each other, creating a picturesque background.

Uncontrolled cultivation and human settlements have left the forests bare, making landslides common in the area.

County disaster management teams estimate that 500 people have died in small, intermittent landslides over the past 10 years, but with Chesegon still high on the list of the worst disasters yet.

Richard Lotongot, who was involved in the initial rescue mission, says they waded past huge rocks as they went through the sludge to save those who were trapped.

“We had to improvise local stretchers made of sticks and sacks to carefully lift people who had been trapped in mud and were injured. Occasionally, we risked being swept as we tried reaching casualties who were deep in places that were difficult to reach,” says Lotongot.

He sustained injuries during the rescue operation and narrowly escaped being swept towards the swollen River Kerio by the fast-moving water.

Paul Lomuria, another survivor from Chesegon market, still cannot believe how he escaped unhurt as he rushed from his shop to safety.

“I was caught up in my shop during the tragedy. A nearby tree saved my life after I clung onto its branches and hoisted myself up to wait until I was rescued,” says Lomuria whose flourishing herbal medicine shop was swept away.

He says he lost stock worth at least Sh500,000. His business has since been unable to recover.

READ ALSO  'This one hit me harder,' Ken Mijungu in mourning

When the water hit her village in Kobil, Everlyne Chepkong’a knew she stood no chance. From the loud bang, followed by lumps of heavy soil and flood water moving downstream, the mother of seven knew only a miracle would save her. And she got one.

As the water raged down towards her house, it suddenly diverted towards the nearby Liter Secondary School, sweeping everything in its path.

“Many lives were lost and property destroyed in the calamity that has never been witnessed before and it’s only by the grace of God that I survived to tell this story,” she says.

She now wants the government to carry out environmental conservation programmes along the escarpments to avert similar tragedies.

There are 16 people still missing from Kobil village following the tragedy, six from Kakisoo and one each from Sewes and Katilit.

“Most of the survivors lost their loved ones and have not come into terms with what happened. They require counselling to be stable psychologically and then rebuild their lives,” says the administrator.

The Kenya Red Cross Society, which was involved in the rescue and retrieval operation, offered some counselling but left the site when the government called off the rescue mission.

A post-tragedy report by the Kenya Red-Cross Society, World Vision International and the Kerio Valley Development Authority indicates that most of the survivors are still traumatised and it might take long for them to fully recover.

Some of the humanitarian agencies operating in the region have, however, embarked on counselling the survivors and offering assistance to empower them get back to their normal lives.

By nationmedia.co.ke
Related Topics:
Up Next