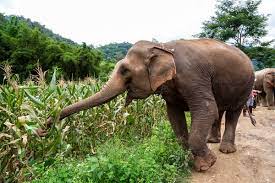 Four people were yesterday shot dead in Kajiado by armed police officers while the area residents demonstrated against the threats posed by wildlife in the county which has led to the indefinite closure of schools.
Thursday’s demonstration blocked the Nairobi-Mombasa highway for hours, as protesters placed rocks and burning tires on the road, leading police to intervene.
The area residents claimed that the elephants have been destroying their crops and at some points killing people.
Kajiado Governor Ole Lenku extended sympathies to the families and friends of the four men who were recklessly shot dead by the rogue police officers.

“I urge the Inspector General of Police Hillary Mutyambai to investigate this criminal act.  I also call upon IPOA to make sure the police who shot unarmed civilians in peaceful demonstrations are arrested and charged in court. I vehemently condemn the abominable act, I have personally visited the scene and the hospital and saw about 5 Kenyans who are seriously injured. Sad!” he lamented.

He also asked the police officers not to use excessive force on unarmed civilians.

“Every life is precious in our dear beloved country and the reckless shooting by the police of our precious citizens, especially young promising men, is sadistic and inhuman. Police violence against unarmed civilians only helps in eroding public confidence in the Police we look forward to an immediate answer from the government,” he further added.

The protesters noted that Kenya wildlife service is a witness that the Maa community has been hospitable to the animals.

“Our people have been living with animals in peace irrespective of frequent attacks by these animals. We demand an immediate response from the government, and the KWS, and will call upon other independent organizations to help,” they said.