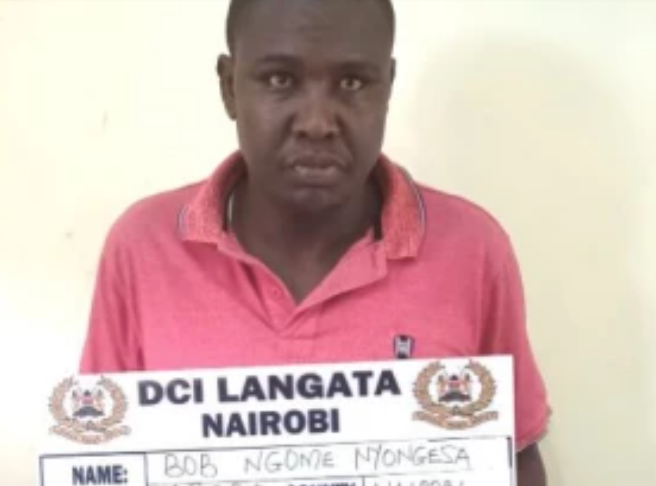 44
SHARES
ShareTweet
A man has been arrested in Ongata Rongai, Nairobi, after allegedly obtaining Ksh.150,000 from a man selling his car on a popular online site.The Directorate of Criminal Investigations (DCI) says Bob Nyongesa posed as a white woman named Ryan Britney and called Ali, the vehicle owner, posing as a potential buyer.

According to a report released on Sunday by DCI, Nyongesa, who claims to live in Narok and has previously served time in Kamiti and Kodiaga prisons for fraud-related offenses, stated that he would like to see more photos of the vehicle, which costs Ksh.1.4 million, before traveling to Nairobi to finalize the deal.

“He expressed willingness to buy the motor vehicle, a sleek Mercedes Benz at Sh1.4 Million. Nyongesa then requested for more photos of the vehicle posted on. Convinced that the prospective client was a serious buyer, Ali sent him more photos including the interior and other parts of the machine,” said DCI.

He later called Ali with “bad news” on the day they were supposed to meet, claiming that en route to Nairobi, he hit a herd of cattle and needed Ksh.150,000 in compensation or he would be lynched. He promised Ali that he would pay up once he arrived in Nairobi and found a bank.

“Nyongesa, posing as Ryan contacted the vehicle owner and told him that while on the way to Nairobi from Narok, her vehicle had hit several cows and goats belonging to Masai herdsmen, and the machete wielding herdsmen were at the verge of lynching her if she did not compensate them at Sh150,000,” wrote the DCI.

“In a well scripted lie, Nyongesa, sent Ali images of livestock carcasses sprawled on a road and her purportedly damaged vehicle. She appealed to Ali to send her the money and promised to refund once she accessed her bank in the capital as she made payments for the vehicle.”

Ali, unaware about a possible scam, took the bait. Nyongesa’s phone was turned off and calls went unanswered shortly after receiving the money.

He is said to have reported the matter to police which led to Nyongesa’s arrest.