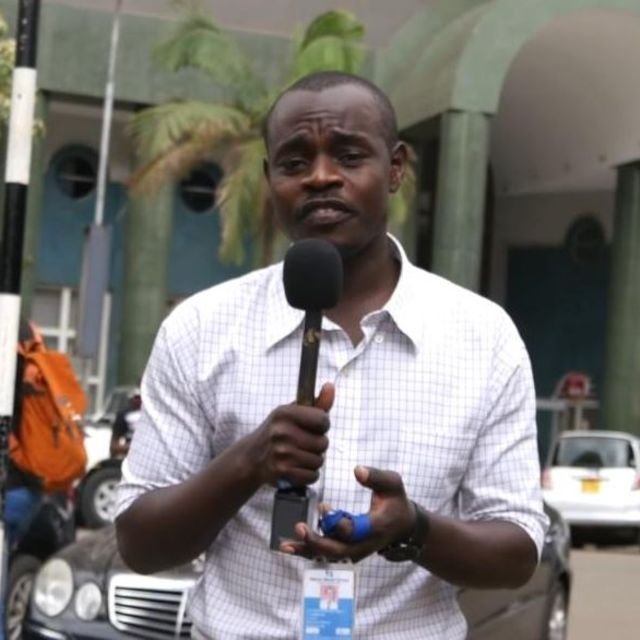 Dickens Ngicho, 27, is perfect proof that something good can come out of Nazareth. Or, in this case, Majengo.

Majengo Estate is the quintessential melting pot of tribes, creeds and hustles. In bustling Majengo, a young Dickens – who’s the firstborn in a family of two – was bitten by the journalism bug.

At dusk, he’d shift his hustle to the CBD. His favourite spot was the gates of the Twin Towers along Kimathi Street. But he didn’t go here to sell, but a dream.

A place to dream

Dickens recognised the media personalities who were transitioning through NMG’s doors. He’d seen them in the small screen, in the dingy unventilated TV halls in Majengo, which he often frequented.

“After mom’s demise, my brother, Kevin and I were left in the care of our paternal grandmother. She was too old to care for us.”

Around 2003, a famine ravaged Homa Bay. At some point, Dickens and Kevin stopped going to school.

“The only food were traditional vegetables called murenda, which we’d consume without ugali. In school, our tummies rumbled loudly, causing us untold embarrassment.”

The brothers devised a plot to get ugali. At their local posho mill, the unwritten rule was there had to be some quorum, before cereals were milled. Folks lined up their bags inside the mill, then went about their business.

Dickens and Kevin entered the premise and pretended they were playing marbles. One sibling crouched near the door and the other on the furthest end, inside the mill, far removed from public scrutiny. The one inside would stuff maize grains in his pockets. When full, they’d go to the back of the mill, where they had stashed their paper bag, and empty the grains inside.

Then they’d return to the mill and switch places. When their bag was full, they’d walk around the centre and beg folks to buy them sugarcane, worth one shilling. When they had three shillings, they’d take the money and maize to their grandma.

And, assured of ugali to last a week, they would resume learning.

Dickens excelled in KCPE. He was called to the two best schools in Homa Bay County: Obera Boys and Agoro Sare. But due to financial constraints, he forfeited these places.

His uncle enrolled him in a private school, which was in its infancy. The boarding school, situated on the road to Oyugis, has since been shut down by the Ministry of Education.

“We were its pioneer students,” Dickens recalls. “Boys helped in erecting the buildings, while girls cooked… but meals weren’t even assured.”

Fifty shillings was Dickens’ pocket money. He’d buy a long stick of sugarcane worth five bob, cut it into three pieces, stuff two sticks in his bag, then trek for five hours to school, chewing cane and the cud.

During sports days, the sight of students from Agoro Sare would cause Dickens to be engulfed by pangs of low self-esteem.

Dickens passed KSCE and was admitted to the University of Nairobi. But his uncle vetoed his choice of journalism as a career and insisted that he join a teachers’ training college.

It was a classic case of either/or. It was either his uncle’s way. Or he hit the highway.

In 2013, the trained teacher travelled to Nairobi to live with his maternal uncle in Tena Estate. He was the only maternal relative who’d kept in touch and helped, in deed and kind.

Dickens found a teaching job in a private primary school near where they lived, earning 6,000 shillings a month.

One Thursday, his uncle’s wife informed Dickens that he had two days to look for his place. Reason? They were shifting to a smaller house.

“I had just joined the UoN School of Journalism’s evening classes. I was also helping pay Kevin’s fees.”

“I don’t blame her. I appreciate her. She took care of me for one whole year.”

The school where Dickens taught had constructed a windowless timber structure, which was used for multiple purposes. This became Dickens’ bedroom.

“I put my documents and clothes inside my small bag, went and pried open the ceiling of the kibanda, and hid my bag there. I didn’t want to burden anyone.”

Dickens slept on rugs he’d made for pre-school kids to nap on. He would wake up at 5.30am, leave the compound, and then return at 7am; as if he’d come from home.

“In school, teachers would be the ones serving lunch. While serving my pupils, I’d take a cup and fill it with rice and beans, which would be my supper when I arrived from UoN. This was my routine for one year, during my first year of university.”

A mum and brother by any other tribe

Enter Eric Obae. Dickens and Eric met at Nairobi East SDA Church. Eric lived in Donholm, which wasn’t far from where Dickens lived. Dickens became a regular visitor at Eric’s home, even sleeping over during weekends.

One day, some of Dickens’ church folk noticed that he’d lost weight, wasn’t as clean as he used to be and talked less. It was only after pressurising him that he opened up. They shared with church elders, who gave Dickens Sh15,000 to rent a house in Umoja.

“Eric’s mum, who’s also my mum, bought me household items to start a new life in the one-room I had rented.”

“She’s a widowed biological mother of three but was also taking care of her niece and nephew.”

Eric wears his big heart on his sleeves. He was in Upperhill School with Brian Oenga, who was an orphan.

In 2010, when they cleared high school, it was at the school gate that reality sunk in for Brian; he didn’t have a place to go.

And just like that, without warning his mum, Eric brought home a new family member.

Eric is Kisii. Dickens is Luo. But the milk of human kindness is thicker than blood.

Dickens stayed in the rented house for two months before he made the hard decision to return to the kibanda, after storing his household items in a relative’s house.

Destiny calls – almost always inaudibly – to destiny-helpers. These types, like magi of yore, come bearing necessities for every child of destiny.

UoN’s Dr Kamau Mwangi footed Dickens’ bill for two units. Dr Silas Oriaso mentored and dropped him home. Kilemi Mwenda was a mentor and provider. The registrar, Moses Araya was and has always been Dickens’ father figure. Dr George Gathigi hooked him up with gigs to help supplement his income.

Apart from university staff and relatives, there’s a slew of journalists, too numerous to name, who’ve shaped Dickens’ destiny, and whom he’s eternally grateful for.

And then there’s the woman Dickens affectionately calls, mum. Her name’s Pamela, just like Dickens’ biological mother. She’s got that instinct that nurturing mothers are renowned for. Her instincts went into overdrive right after Dickens returned to the kibanda.

“One day, when I visited, mum called us all in the living room and announced that I’d be living with them, for as long as I wanted to.”

Most dates with destiny resemble sheer coincidences. They can happen in a washroom or boardroom. What matters is for one to perceive it, then seize it.

In 2018, during the Nation Leadership Forum’s taping at the University of Nairobi, Dickens’ path crossed with that of someone who’d alter his destiny’s trajectory. Dickens was then the student leader at the School of Journalism.

“I saw him going to the washrooms. I knew who he was because I’d been volunteering at NTV since my first year at University,” Dickens says.

“I waited for him at the sink. While washing his hands, I introduced myself and requested that he give me two minutes of his time. He gave me two words: ‘Kijana, sema’.”

Dickens gave him an elevator speech. This man bought it. This man — Stephen Gitagama, NMG’s CEO — is just whom destiny had ordained.

The CEO literally took Dickens’ hand and led him to Francis Munywoki, former Daily Nation Managing Director, who was also in the same forum.

In rapid succession, one thing led to another. Jane – recognising Dickens’ digital skills, which he’d acquired at Google Kenya, where he held down a part-time gig – introduced him to Churchill Otieno. He’s the Head of Development and Learning, formerly Managing Editor for Online and New Content.

After going through Dickens’ social media platforms with keen interest, Churchill remarked: “You seem to know what you’re doing; are you ready for an interview?”

Dickens had been ready since 1999. Well? Churchill is now Dickens’ boss.

Last June, Kevin, Brian and Dickens moved to their own nest. Their mum was hesitant to let them leave, what with Eric having flown abroad, which is why these thoughtful sons moved a “salt-borrowing” distance away from their mum’s house.

For now, Dickens’ dreams list has three items. Bless his mum with a mansion. Do his Masters at Columbia University. Work at CNN. With all he’s been through, it won’t be long before these files are on his dreams-come-true shelf.