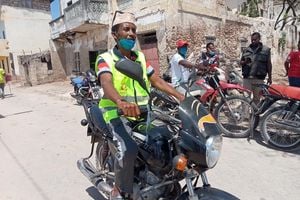 Every time Abdulaziz Kicheko Allan walks past the old Lamu county council hall in Old Town or the new county assembly buildings in Mokowe, he always remembers the time he used to be treated as a VIP inside those buildings.

Mr Kicheko presided over various sessions in those buildings now occupied by members of the county assembly (MCAs).

In fact, he sat in the same seat that current Lamu County Assembly Speaker Abdul Kassim Ahmed now sits in.

Mr Kicheko boasts that he would issue orders to councillors while dressed in a black robe with golden ribbons and a chain.

When Nation.Africa caught up with Mr Kicheko on the streets of Old Town, he was riding a motorbike not for leisure but as a way of trying to make ends meet.

He is now a boda boda operator.

But why did Mr Kicheko decide to join the boda boda business despite the luxurious and colourful life he used to lead as county council chair or mayor?

The 54-year-old father of six says life has hit him hard.

He served two terms, first as nominated councillor in 1997 and 2002 and later as an elected Faza/Tchundwa ward councillor from 2002 to 2007.

He was also appointed and served as Lamu county council chair.

But despite all that, after leaving politics, his life has been that of a hand-to-mouth existence.

He describes the years he served as county council chair as golden.

He says when he was a politician, elected officials served the electorate diligently though they were paid peanuts.

READ ALSO  I might go back, woman who remarried after spouse left her 47yrs ago says

He says the interests of voters came first and that is why many former leaders live in poverty.

He insists that in the old days, leadership was all about sacrifice unlike what we see today with some leaders.

“We were more than selfless. Our salaries would range from Sh1,200 to Sh1,500 but sometimes we would still wait for more than two months to get paid,” he says.

“All in all, we had to put all our interests aside and work for mwananchi. We had to work so that we remained in leadership.”

When he left politics, he says, he had saved very little that could last even a year.

Because he is a family man, he had to find other ways of sustaining his family.

In 2009, he was hired as former Lamu woman rep Shakila Abdallah’s personal driver, a duty he performed until 2013.

“When my contract as Ms Shakila’s driver ended in 2013, I decided to venture into the Indian Ocean as a fisherman. After the Mpeketoni attack in 2014, restrictions, including a night fishing ban were imposed in the ocean in Lamu,” he says.

The fishing ban prompted him to quit the trade in January the following year, when decided to try his luck in the boda boda sector.

Mr Kicheko says this is his sixth year as a boda boda operator in Lamu.

Though he still goes by the titles “Chairman” and “Councillor”, which he uses on the streets of Old Town and as he scrambles for customers, he does not have the privileges of his old job with the defunct local authority.

“You can imagine that the government still owes me. There were several months that salaries were not paid but every time we try to push, no one is willing to pay us our dues. That’s the key reason I am not happy that I served in the county council.”

He says that though he is down today he still hopes for a better tomorrow.

He appeals to political leaders to help push the government to release money to help former councillors like him.

He insists that his predicament mirrors the tough times and financial difficulties his former colleagues are going through in other parts of the country.

“I urge our legislators to help push the government to provide us with a send-off package and a monthly pension to cushion us from suffering even more,” he says.

He acknowledges that he struggles a lot just to pay school fees for his children.

Mohamed Yahya Shamuty, 63, who served as councillor for Hindi ward in Lamu West between 1988 and 2001, supports Mr Kicheko’s appeal that former councillors be given a send-off package.

He says it is true that most former councillors, including himself, continue to grapple with financial difficulties, hoping the government will approve the send-off package they were promised.

Former councilors, he says, played an important role as they laid a good foundation for the devolution citizens are enjoying today.

“Were it not for us, there would be no assets that would have been devolved after the promulgation of the 2010 Constitution,” he says.

“I am saddened and embarrassed that we have been neglected by our own government. We live in abject poverty yet we sacrificed a lot for this country.”

“He is among the members I respect the most. As boda bodas we still view him as our councillor and chair here with his ever-smiling face,” he says.

He went to Faza Primary School before he joined Faza Secondary School, dropping out in Form Two in 1987.

He lives in Wiyoni, Lamu island.