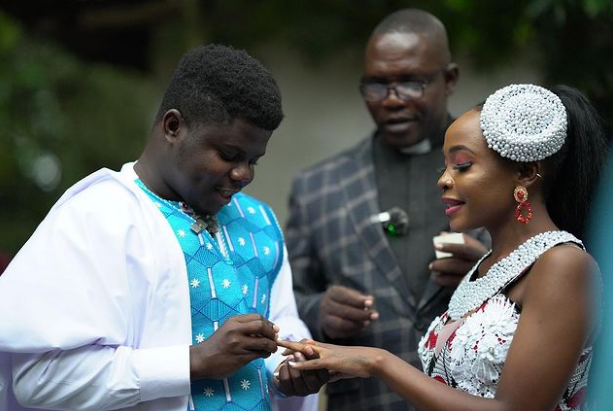 Miss Trudy, renowned Kenyan YouTuber, is no longer available for dating. Over the weekend, the soft-spoken lady wedded her Ghanaian fiancé Wode Maya. The nuptials took place in Yala, Busia.

Trudy posted a picture on social media of herself and Wode exchanging rings.

The Kenyan You tuber stated in a previous interview with Oga Obinna on the Cooler Kula show that she met Wode online.

“He sent me a DM 4 years ago but I saw the message three months later. He was coming to Kenya to create content. By the time I saw the text he had gone back home. I had savings za 40 K, I had done You tube for 1 year so I decided to take a risk and went to Ethiopia.“

Trudy recounts that her boyfriend proposed more than three years after they first met.

“He proposed in December. I had a feeling because the sister came and asked about my ring size but I wasn’t sure because she was also getting married.”

“I thought she wanted to test my ring size for herself. We went to Kilimanjaro for 9 days and when we got to the peak he proposed.”

When Trudy first met her fiance, she realized it wasn’t love at first sight, and she later said his gentleness won her over.