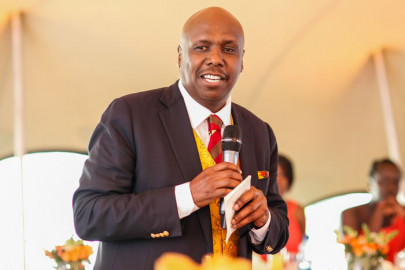 The Senator elect is William Cheptumo who was declared the winner after ganering almost twice the number of votes that Moi did.

According to Baringo County Returning Officer John Mwangi, Cheptumo, who vied under a UDA ticket, has been serving as Baringo North MP for 15 years. He trounced Moi after garnering 141,777 votes, while the Senator came second with 71,408 votes .

TSP Party’s Felix Chelaite ranked third in the race after getting 3,261 votes. He conceded defeat.

In his maiden speech the Senator-elect assured residents that he will work hard and deliver his promises.

Cheptumo said traversing the whole region was hectic owing to the cases of insecurity.

He said he is focusing on uniting all communities in Baringo and also concentrate on his mandate as a Senator.

Moi, who is also the KANU chairman was under the Azimio la Umoja-One Kenya alliance, and contested in a region highly dominated by Kenya Kwanza coalition.

In Meru, Governor Kiraitu Murungi lost to little known Kawira Mwangaza much to the surprise of pundits.