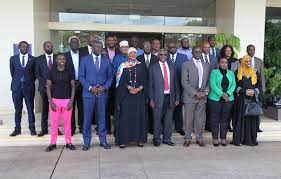 The FKF Transition Committee has unveiled members of its Independent Disciplinary and Appeals Committee (IDAC).

The chairman of the FKF Transition Committee Justice (Rtd) Aaron Ringera appreciated the new members for heeding the call of their country in time of need.

“It is always an honour to be asked to serve your country in any capacity. By agreeing to take up this role, it means you value your country and are ready to serve the game. I know also that you are all eminently qualified for your roles,” Justice (Rtd) Ringera said during the unveiling of the five-member IDAC.

“This is an able team of men and lady, who have got the necessary experience to do the right job, and I appeal to them to be professional in their undertakings during the pending cases and the remaining matches of the season,” he said.

Leagues and Competitions chairman Ali Amour praised the composition of the team saying it is an all-around committee.

“This is a balanced team comprising of a referee, coach, ex-player, team manager and a sports legal expert who will offer consultancy services to the team. We are expecting our leagues to end on a high without any complaints from clubs, which are committed to honouring their obligations,” said Amour.

Coach Oyugi was the brains behind tens of Kenyan sportsmen with academic acumen moving to the USA to study sports sponsorships in a programme that started in 1997.

He said the football world is bleeding today because of a shortage of leaders and emphasised proper training of footballers to help them become effective leaders by giving them responsibilities beyond their football career.

“Leadership is a skill that can be harnessed from an early age. Through football, we contribute to this by nurturing players’ hidden talents, and recommend them to international learning institutions that enable them to socialise, and build their confidence and self-esteem, besides the diversity and promotion of physical, emotional, mental and spiritual alertness,” concluded Oyugi.

The Independent Disciplinary Standing Committee is mandated to adjudicate disciplinary matters which are pending from the tenure of the FKF Caretaker Committee and, those which will arise during the mandate of the FKF Transition Committee by the FKF Constitution and the Rules and Regulations Governing Kenyan Football (2019).