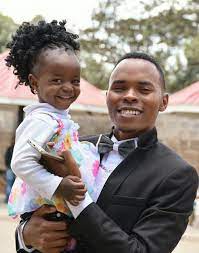 Following the virality of a video in which he is seen threatening his three-year-old daughter, Kamba Benga gospel musician Stephen Kasolo has been prompted to deliver a public apology to his daughter and Kenyans at large.

The singer claims he had no intention of harming his daughter. He also accepted full responsibility for his acts, pleading for pardon from Kenyans.

“Praise God my fans? I want to take this opportunity to apologise to my baby Shine Kasolo and all our fans for the video which is going viral. I never meant any harm to my daughter and I never will, nevertheless it has brought a lot of tension on social media. Kindly forgive me this will never happen again, I’m sorry even before God,” reads Kasolo’s apology.

A video of Kasolo frightening his daughter Shine Kasolo for reportedly smashing his costly water bottle went viral on Monday.

The video sparked outrage among internet users, with some calling for the gospel singer’s arrest for allegedly abusing his little daughter.

Carolina Carlz, a media figure, entered the chat, condemning Kasolo’s behavior and called for his prosecution.

“He should be behind bars! What the actual fck! This is not normal and we shouldn’t normalize and laugh about it. Imagine if you were that child? If someone threatens to kill you, do you go and report to a police station? Yes. This baby can’t! But you can do it for her. He’s not fit to be a parent! Are we going to wait till he actually kills the baby to talk? We should make noise till he’s arrested and charged,” she stated.