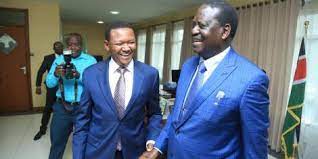 The Political Parties Dispute Tribunal, on Tuesday morning, threw out an application by Maendeleo Chap Chap seeking to exit the Raila Odinga-led coalition.

The court ruled that Mutua and his Maendeleo Chap Chap Party, should utilize dispute resolution procedures under the coalition agreement signed between the constituent parties within the Azimio La Umoja-One Kenya coalition.

Governor Mutua had complained against what he called dishonesty within the coalition, he cited plans to zone regions in favour of some parties contrary to their agreement.

The governor also claimed that he was denied access to the coalition’s agreement they had signed.

The governor, however, moved to Kenya Kwanza Alliance even before the court made its ruling that is coming now as a blow to him.

Whether he will appeal or take another action is a matter of time.

READ ALSO  I made about Sh 20 million during Covid-Flaqo reveals
Related Topics:News
Up Next

Software Engineering Listed amongst the Most in Demand Careers -Expert