Grilling duo on a meaty business 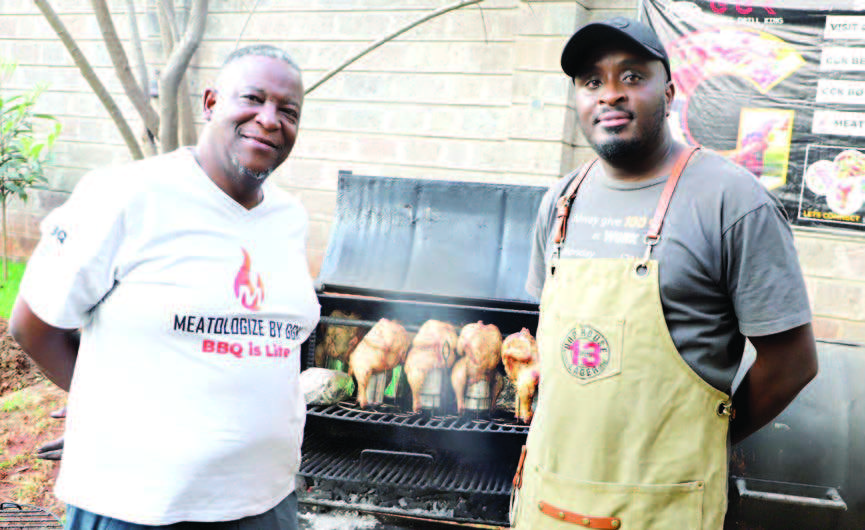 When Covid-19 hit last year, George Githinji Kareithi, proprietor of and partner at George Grill King found himself at home, with no work and nothing to do. But he had a passion for grilling, something that he began way back in his college days in Canada in 1989.

“Everyone used to come to my place for a barbecue. That’s what I would do whenever I ran out of money. I would hold a beer party and mix some local beer (which I was taught how to brew at home) and then host people and they would pay me. I love meat. I love barbecuing it, playing around and preparing different options: beef, chicken, fish. Give me a grill and that’s where I am,” he narrates.

And when he came back home in 1998,  the IT expert continued with his consultancy work until the pandemic, when he found himself going back to his old passion. Together with friends from Kenya and Canada, he started a group on Facebook and began a barbecue challenge. Soon, people began following them and watching the recipes that they were preparing and the conservations around it.

“People started sending orders for me to grill meat and send it over to their homes, and they would give me a bottle of whisky as a token of appreciation for the work. They would use their own means of transport to pick it up from my place,” he says.

Upon noticing how people would request and pay for the services, his wife advised him to turn this passion into a business.

“I talked to my family and expressed my desire to set this up at the family premise, Batian Apartments Hotel in Kilimani, Nairobi. I had been doing a lot of events every first Friday of the month, hosting a couple of people for some barbecue,” he says.

With his business partner, Patrick Karanja, both passionate about grilling, the two began the business. Every Friday and Saturday, they would entertain guests with grilled meat. Their unique selling point is mixing American and local styles while preparing the meat.

“In American style, one does a bit of smoked meat and there is a tendency to go slow on the grill. Sometimes they do fast grill or quick sear and it’s ready to eat because they appreciate a lot of medium-rare sort of barbecue. Americans also appreciate something that has been cooked for many hours. The Kenyan style also has the same kind of thing, but we use goat and not beef. When Americans grill beef it’s usually in thin slices because it’s very tricky to work with. If one uses the American style of low and slow, they can cook our beautiful Kenyan beef. Our cattle is grass-fed and it’s natural, which provides the best flavour,” explains George.

Merging the two means they can either do the slow cooking barbecue or grill first and then slow cook it. Americans also use special kinds of trees such as Applewood, oak, hickory to bring out the flavour.

“Amongst the Maasai, certain kinds of trees are great because when you smoke them, they add more aroma. I, sometimes, work with any natural tree around such as pear, guava, and quite recently began using smoking pellets from mbuyu (baobab). One can also use mango, but sometimes it can be a little harsh. I am about to experiment with macadamia because it is like pecan, but provides a different flavour. Our forefathers knew exactly what they were doing when they picked a different kind of trees to roast meat for different kinds of flavour,” he says.

When it comes to chicken, they use beer cans during grilling, a method George confesses to having learnt from his nephew’s Russian girlfriend during a visit to their place.

“Americans cook their chicken by mixing beer and spices to make it soft while leaving the outside crispy. Grilling practically shocks the chicken to cook and the end product is an overcooked meal that loses its flavour too,” he explains.

For Patrick, a barbecue enthusiast who learnt the art through YouTube and advice from people, the business has made him adapt to the new styles of barbecuing, unlike the normal choma where one uses salt and water only.

“Traditionally, we used to boil meat then put it on fire. Now I have conformed to the new ways of browning and foiling. I have also learnt that I do not have to use a temperature gauge on my grill and instead use my hand to gauge and that the type of grill matters a lot. Another thing I have learnt is the BBQ process: slow cooking makes the meat more tender and softer,” he explains.

So, popular has the barbecuing challenge been that major alcohol brands wanted to get the two on some of their promotions and projects.

One of the challenges George and Patrick faced was getting people to adapt to their pre-paid mode of ordering. Since the two only grill on Fridays and Saturdays, customers need to place their order at least 24 hours before either day and either pick up or eat the meal at the restaurant.

“This solved the challenge of organisation. It also means the quality is not tampered with. When someone comes to the restaurant and wants a well-done chicken in 30 minutes and the chicken is still frozen, it’s a miracle to make it in that time. However, with time, we are able to prepare the meat to standards. At the same time, I can experiment on recipes and give them something they will like. The challenge was, in doing this, we have lost clients who want to pay when they get here because they are used to this mode. It was a challenge the first four months, but thanks to word of mouth, many clients have already adapted,” continues George.

Patrick adds that while the business as a whole is doing good, another challenge is expanding the business.

“It is difficult to find grill enthusiast who can handle the grilling process and maintain standards,” he notes.

• George GithInji and Patrick Karanja are passionate about grilling, something that brought them together to start a business called George Grill King.

• George began grilling back in 1989 when he was in Canada, hosting parties where he would grill and serve meat.

• Patrick, on the other hand, is a self taught grill guru, learning from YouTube and advice from experts in the business.

PATRICK
“Traditionally, we used to boil meat then put it on ire. Now I have conformed to the new ways of browning and foiling.