Has Nadia's relationship with Arrow Bwoy come to a halt? 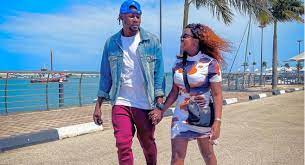 Arrow Bwoy, whose actual name is Yusuf Ali, and Nadia Mukami’s relationship may have hit snags after the two removed each other’s Instagram images.

In addition, the Dodo music star has changed all of his photographs on his social media platform with a teaser post for his forthcoming album.

“I can’t wait to share this masterpiece with you, fam,” he added, veering away from the subject of why he’d chosen to kick her out of his house.

Since she revealed it in mid-2021, the two have been dating. The admission, on the other hand, is thought to be written in order to allay mounting conjecture, particularly in the entertainment business.

The duo recently acknowledged their relationship during a live Instagram session.

Moreover, the duo have been feeding couple objectives to their social media followers, leaving tongues wagging and admirers adoring their connection at times.

The Usinimwage hitmaker alluded at taking the things to the next level just several months ago, which sparked more suspicion.

That suggestion piqued fans’ interest, just for Arrow Bwoy to follow up with some other song, Unconditional Love, wherein he seems to propose to some other lady.

Here is Ruto, Mudavadi’s itinerary in US, UK next week