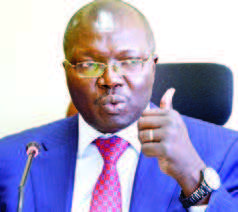 Hefty perks await Kenyan nurses who are headed to the United Kingdom (UK) for work as the government concludes negotiations into the deal.

Labour Cabinet Secretary (CS) Simon Chelugui (pictured), who is in London heading the talks, says they have already agreed on some basic areas with their UK counterparts.

In the deal, a nurse with a diploma will earn 2000 sterling pounds, which is at least Sh300, 000 at the current exchange rate. Graduates with degree certificates will earn about Sh450, 000 upon signing the contract with the UK National Health Service (NHS).

Besides the hefty pay, all the nurses will be given three months free accommodation on arrival for the three-year contract, which is renewable for another three years.

The UK government will also foot air tickets for those departing, with each nurse receiving a further Sh750, 000 as relocation allowance.

“Those willing to take permanent UK citizenship will also be eligible after working for five years,” Chelugui told the People Daily on phone.

The CS also said the Kenyan nurses who will also relocate with their families will have their children educated for free.

“The UK government will also cater for medical insurance cover for all the enlisting nurses,” Chelugui who is accompanied by Health Permanent Secretary Susan Mochache added.

Inked the deal
This is a follow-up meeting for the bilateral agreement between Kenya and the UK on collaboration on Health Care Workforce signed on July 29, 2021.

During the visit, the team has held discussions with implementing agencies including the UK Department of Health and Social Care, National Health Service, Nursing and Midwifery Council, Oxford Hospital Foundation Trust, the University of Manchester and Christie Foundation Hospital.

Kenya is expected to send at least 20,000 nurses to the UK in a span of three years after President Uhuru Kenyatta inked the deal last July, at a meeting with Prime Minister Boris Johnson. The UK has a shortage of 62,000 nurses.

This year alone, Nairobi is expected to dispatch 5,000 of them with the first batch expected to leave mid this week. By last month over 3,000 had applied frop consideration fro the UK jobs in the ministry’s portal.

The positions were advertised by the National Employment Authority where the applications are evaluated before sending the documents to the Ministry of Health for confirmation and verification for interviews.

There were reports that Nairobi was targeting a cut from the pay to the nurses but the UK government has sought to allay the fears.

The Department of Health and Social Care spokesperson said: “The Government of Kenya will not receive any money from the salaries of Kenyan nurses working in the NHS. In the agreement, nurses will be employed by NHS trusts under individual contracts and their salaries will be paid directly to them.”

Related Topics:NewsSimon Chelugui
Up Next

Our long, painful experience with fibroids

Mystery as lovers plunge to death in Mtwapa