Here is Ruto, Mudavadi's itinerary in US, UK next week 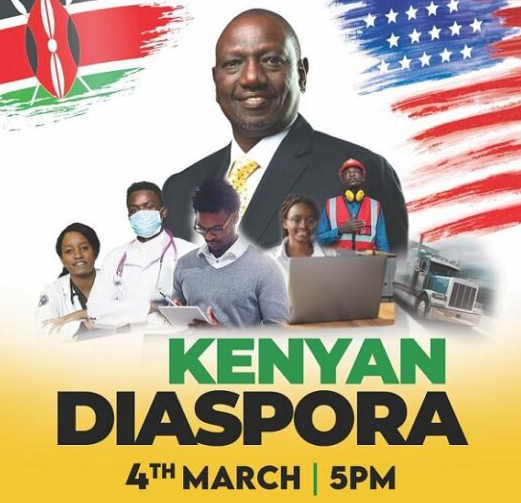 Kenya’s Deputy President William Ruto and Amani National Congress (ANC) party leader Musalia Mudavadi will fly out of the country on Sunday for a 10-day tour of the United States and the United Kingdom.

Ruto will on March 2 hold discussions with the US House Foreign Affairs sub-committee on Africa, Global Health and Human Rights representative Karen Bass on politics and policy, according to a tweet by Carnegie Africa programme, which is organising the trip,

The DP is expected to deliver a speech at Georgetown University  in washington DC  that evening.

“The conversation will be moderated by CEIP Africa Programme Director Zee Usman and Georgetown University’s Ken Opalo,” stated the tweet.

The organisation said in a statement ; “We are honoured to host the Deputy President of the Republic of Kenya, William Ruto, for a discussion on the future of governance and economic development in Kenya, East Africa, and the African continent. We invite you to join us for this special conversation with Deputy President Ruto and distinguished guest, US Congress member Karen Bass.

Bass is the US representative for California’s 37th congressional district and chairs the House Foreign Affairs sub-committee on Africa, Global Health, and Human Rights. The Carnegie Africa Programme engages policymakers and scholars to shape global discourse and policy in the region and to amplify voices of African experts on the ground.

Yesterday, officials at the Ministry of Foreign Affairs said they had given the green light for the trip, which they clarified was not official government business.

“The trip is cleared to take place. Although it is not on official government business. It is permission to travel,” said Principal Secretary Macharia Kamau.

Sunday’s trip will be Ruto’s second out of the country this year, having made a private visit to Dubai last month.

The lecture tour will be Ruto’s second to the West during his 10-year term as Deputy President, having previously travelled to the United Kingdom where he gave a talk at the Royal Institute of International Affairs, commonly known as Chatham House.

Ruto has had run-ins with the government over his foreign visits, the most recent being his aborted trip to Uganda after he was stopped at Wilson Airport just before he could board a private jet to Kampala.

Three years ago, another trip to the United States and Canada, was also scuttled at the eleventh hour. Ruto was to fly out for an extensive tour of the two countries in a strategic re-branding move to establish support in influential foreign capitals.

The DP intended to use the visit to engage contacts in the two countries with a view to bolstering his 2022 presidential bid.

The DP also planned to meet Kenyans in the diaspora, a critical segment of the population with a massive war chest.

Many of them will be voting for the first time in August.

However, it emerged then that the trip had not been approved by State House, as protocol demands. Influential people working closely with President Uhuru Kenyatta believed the trip was simply an extension of Ruto’s 2022 campaigns.

President Kenyatta’s plea to his second in command and his allies to freeze their 2022 campaigns fell on deaf ears and the DP has continued to traverse the country to market himself.

Mugonyi said then that the trip was cancelled because of what he termed “tight scheduling challenges” as Ruto’s foreign tours were coinciding with President Kenyatta’s.

According to Mugonyi, the DP was to fly to the US for “various official engagements” and proceed to Canada to speak at the Open Governance Partnership conference.

During his trial at The Hague, Netherlands, Ruto argued that the President and his deputy cannot be out of the country at the same time.

But in 2016, for instance, Uhuru flew out to Zambia for ‘The Path to Universal Access to Energy in Africa by 2025’ meeting. At the same time, Ruto was in Turkey for the World Humanitarian Summit.

Global superpowers such as the US and the UK are influential in determining who becomes president in Africa.

Yesterday, officials at the Ministry of Foreign Affairs said they had given the green light for the trip, which they clarified was not official government business.

“The trip is cleared to take place. Although it is not on official government business. It is permission to travel,” said Principal Secretary Macharia Kamau.

Has Nadia’s relationship with Arrow Bwoy come to a halt?