Here is when and where President Kibaki will be buried 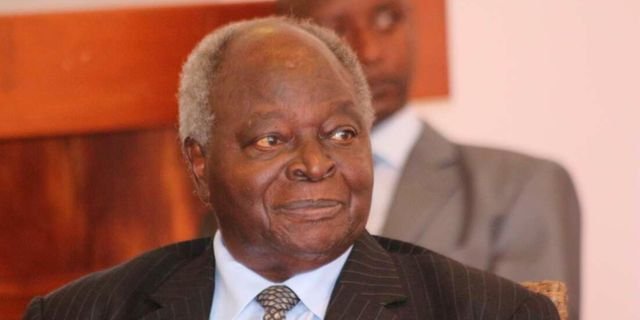 Kenya’s Cabinet Secretary for Interior Affairs Fred Matiang’i has announced that former President Mwai Kibaki, who passed away on Friday April 22, 2022, will be buried on April 30 2022 at his Othaya home in Nyeri County.

Matiang’i, who chairs the funeral committee of the late president, said the burial will be preceded by a state funeral service at the Nyayo National Stadium on April 29.

According to a programme seen by ksnmedia.com, Kibaki will lie in state at Parliament for three days from Monday through Wednesday next week.

Speaking to the media on the steps of Harambee House, government officials, dignitaries and members of the public will be allowed to view the body of the former leader and pay their respects at Parliament buildings.

Mzee Kibaki died in Nairobi on Friday morning and his body moved to Lee Funeral Home in Nairobi.

Kibaki was still battling the consequences of the road accident he was involved in 2002 ahead of the elections that thrust him into the leadership of the country, according to family members.

“Before breathing his last, mzee had been in and out of Nairobi Hospital for various ailments, including blood pressure,” a family member who sought anonymity told ksnmedia.com.

READ ALSO  Asiya Mohammed: I will never wallow in self-pity!
Related Topics:KibakiKibaki funeralMwai KibakiNews
Up Next