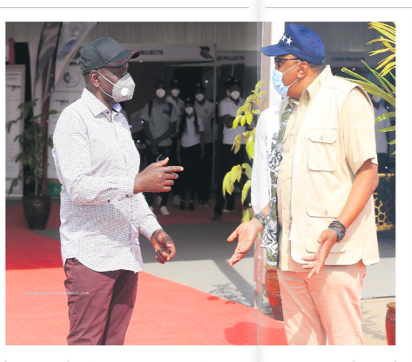 The President’s private office at State House is very nice. It’s large with proper office furniture and one of those sofa set areas. There are no bulging bookcases although there is a display case.

There is quite a collection of sports memorabilia, an indication of President Uhuru Kenyatta’s interest in matters youth. The desk is big but bare with two water bottles on the left hand corner. There is a pair of reading glasses which he picks up at the end of the interview and casually slips into his breast shirt pocket. The President had been reading, but most probably not a book. Probably secret dossiers.

There are five, if I am not wrong, presidential busts in this office. Four are behind the President’s desk and one, of his father, the first President Mzee Jomo Kenyatta, is in the display case in front of him. On his right are two, one of himself and the other of his father, and on his left, that of former Presidents Mwai Kibaki and Daniel Arap Moi.

It is quite clear that the President honours the legacy of his father, as well as the Presidents who came after him, and this is an important handle on his psychology and understanding who he is and how he wields power.

The Kenyan presidency is a massively powerful office. The public does not know this because independent observers such as editors are not allowed into the inner sanctums of power and rarely come into contact with Presidents and their retainers.

When I saw the call from Cabinet Secretary Joe Mucheru on Monday morning, I groaned. Oh no, not the Taifa Leo headline again.

Taifa used to be a quiet paper catering to oldies and rather inappropriately flirting with racy tabloidism but, in recent years, the paper has become young and muscular in its news approach and fearlessly biting in its headlines. This endears it to the reader, sure, but requires the manoeuvering of a matador to keep it away from the reach of the bull’s horns. Luckily, it was an invitation to speak to the President.

This encounter with President Kenyatta was almost enjoyable, relaxed even. First, there were many of us. Standard Editor-in-Chief Ochieng Rapuro and our Mediamax colleague Eric Obino have been my newsroom colleagues for more than 20 years. Francis Gachuri of Citizen is an old hand and a good man to have too.

We have spent more time with each other than our spouses, no better company in a sticky situation. Secondly, the President was in fine fettle: he looked fresh, rested, engaged, mind clear and as quick as a rattlesnake. He was spoiling to engage, parry and thrust.

They herded us into his office, drew the curtains, closed the door and it was just us nice boys from the press and the Commander-in-Chief. I addressed him as “Your Excellency” because where I come from and to our generation, any Kenyan who occupies the governor’s house on the hill is deserving of the highest titles. Besides, I can address you with the most extravagant of your titles and still judge you with arctic objectivity. My colleague who has had the benefit of priestly training primly struggled with “Mr President”.

As the press coverage shows, the President is overweight; his normally big face is even broader now. But it is the comfortable weight of a prosperous, middle-aged man who appears to love life but, unlike his more disciplined Handshake partner, former Prime Minister Raila Odinga, not the painful hours in the gym required to remove the evidence. Mr Odinga is famous for hitting the gym before sunrise.

The President engaged animatedly, sometimes getting into his answer even before the questioner had finished his query. Even though most times he maintained a fixed smile on his face and his words were carefully weighed, I think he was furious.

The Court of Appeal had got under his skin, he felt they were “misguided” in their ruling and as a result Kenyans had lost out.

He was not giving up on the BBI agenda, he said, and would continue to fight with likeminded people even out of office.

Away from the facts that were stated, as an observer, here is what I think was left unstated.

First, I think the President believes we don’t get this BBI thing and what it was all about, which was to remove conflict from politics and stabilise the country even during elections. He admitted that when he started his dialogue with Mr Odinga, he was “cagey” and it is only later that he realised that they both recognised what he terms the “underlying” causes of Kenya’s political instability and they decided to pick up the challenge and fix it. If he was to be less guarded, I think he would describe the Judiciary as wrong about this whole BBI thing and of having made a mess of stuff in the process.

If the Independent Electoral and Boundaries Commission is not properly constituted, there is a long chain of consequences. The 27 by-elections it has conducted are illegitimate, for example. And what about the Court of Appeal itself, whose president was elected in a process supervised by IEBC?

If I was willing to take a bet, and I am not a gambling man, I’d wager that term extension is on the table. There are many arguments being made about the constitutional requirement to do constituency boundaries, an explosive can kicked down the road in 2010, at least 12 months before the next election, a timeline which has already been breached.

I take the President on his word that he is working on the existing election date and that he is not bought on the extension argument. Because down that route lies only disaster and a bad precedent.

READ ALSO  SAD: Young man’s pain as wife, 23, killed on the way to give birth

Relations with his partner, Deputy President William Ruto, are bad. Quite bad.

In that interview the President spoke at length about DP Ruto but never once mentioned him by name, I guess not because it was about the identity of the person he was criticising being known, but more likely he couldn’t bring himself to address him by name. What a far cry from the days of “My brother William”. And the speed with which Mr Ruto picked up the President’s remarks, and the alacrity with which he has been hitting back, shows a friendship gone totally sour. If only all of them had been willing participants in that handshake…

I believe him when he says he loves this country and its people. I also believe that he is full of good intentions and works hard to fix things, whether it is building roads in slums, digging boreholes or opening hospitals at night. A lot of that work is unappreciated because the wider public knows nothing about it. But I also think he is, deep down, a benevolent ruler, not a natural-born progressive democrat. The messy business of institutional negotiation, cajoling and pushing people to do their jobs does not appear to be part of his repertoire of talents.

I also think that he struggles with the contradiction that democracy devolves power to various arms, but not responsibility.

Judges do not jail thieves, why is it his fault and not theirs? The Republicans incite their followers to refuse the vaccine, mobilise against masks and lockdowns, then the Delta variant sweeps in, killing thousands and overwhelming hospitals.

President Biden carries the can. If the rains fail in October, it’s the President’s fault.

I think President Kenyatta is not the fun-loving, loan-taking cliché we see on Twitter. History will be quite generous to him, especially if he handles his succession fairly and firmly.

Related Topics:NewsUhuru Kenyatta
Up Next

Asiya Mohammed: I will never wallow in self-pity!