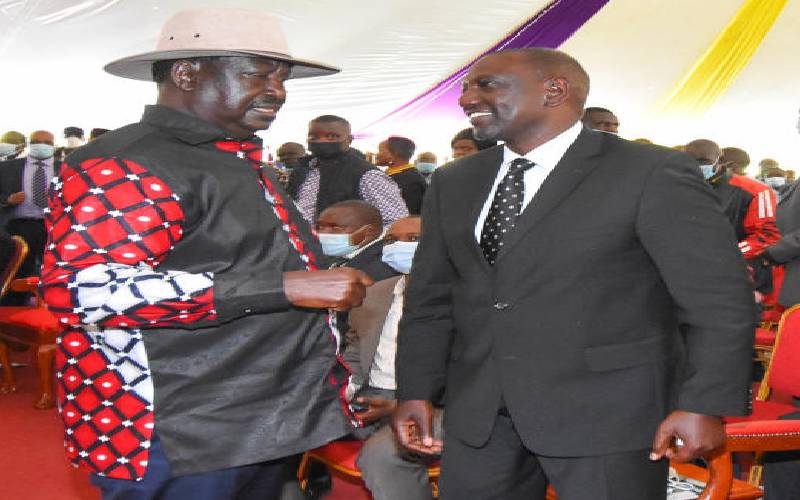 Yesterday, Ruto and Raila who were sharing a podium for the first time this year during the burial of Abel Gongera, the father to Kisii Deputy Governor Joash Maangi, watched as their allies exchanged blows.

Tempers flared over succession politics, the Building Bridges Initiative and fight against graft.

Security personnel and aides of the two leaders surrounded them as their supporters clashed before South Mugirango MP Silvanus Osoro was floored.

Trouble started when Osoro took to the podium to confront Dagoretti North MP Simba Arati after he told Ruto to apologise over the 2007 post-election violence.

The MP claimed the DP was surrounded by corrupt leaders who were defrauding Kenyans.

“We have several leaders here in the company of our deputy president who have a tainted life. These are fraudsters who should not be allowed to take up any leadership position,” said Arati.

Osoro who spoke before the Dagoretti North MP said the referendum Bill did not consider views presented by the Gusii community.

“Let us be told what BBI has for this region. We cannot support a document that only seeks to benefit other people and enhance their selfish interests,” he said.

The scuffle between the MPs lasted for about 20 minutes as the clergy watched helplessly.

Osoro and Arati were forced to leave the funeral.

Nominated Senator Millicent Omanga, who took to the podium to attack Arati, was whisked away by security officers.

The deputy governor was forced to take charge of the function and invited his boss, Governor James Ongwae, who took over as the master of ceremony.

Ongwae said the Abagusii are known to be peaceful people.

“Such incidents should not be allowed,” he said.

Ruto and Raila have been fighting to control Gusii region, which is seen as a swing vote ahead of 2022 General Election.

The DP dismissed claims that the government has not delivered election promises, saying that when Jubilee came to power in 2013 only 27,000 people were connected to the national power grid. He said now, more than 114,000 households have been connected.

“We have built roads, technical training colleges, primary and secondary schools and many other projects that have empowered Kenyans economically,” said Ruto.

The DP told critics of the hustler narrative to rest easy “since hustlers are not enemies of the rich people, but of tribalism and poverty”.

“Why are people troubled with our wheelbarrow party symbol? Other parties have oranges, umbrellas and chicken as their symbols and we have no problem,” said Ruto.

He added: “When I supported Raila to be prime minister and Uhuru to be president twice, I was a good person, but when I support hustlers I am a bad person.”

Raila mourned Gongera, who died aged 101. He said it was not yet campaign period and leaders should respect each other.

He revealed that Maangi was his representative in Minnesota for the defunct National Democratic Party.

The ODM leader said he led a high powered delegation to Minnesota, including Ruto, and asked the deputy governor to work together with Ongwae in 2013.

Raila reiterated that he won in 2017, but the election was stolen.

“The Gusii people voted for me overwhelmingly. Chief Justice Maraga’s team looked at the votes and found out they were stolen,”  said Raila.

He added: “They went to Kasarani as we went to Uhuru Park but we realised Kenya will go the Somalia way, which was not good. That is why we worked with Uhuru.”

He maintained that ODM should not be blamed for the Jubilee failures.

Ruto promised transformational leadership that will empower both the poor and the rich.

“The way we are bailing out large companies is the same way we should bail out the poor. Even low business enterprises are equally business ventures. We must increase the amount that goes to the grassroots. Let’s change the economy and have a bottoms-up model,” he said.

The DP maintained that there was no difference between the wheelbarrow movement and the Kazi Mtaani project being spearheaded by the government.

Former South Mugirango MP Omingo Magara said every leader has a right to air his or her opinion.

Mathira MP Rigathi Gachagua said the demand by MCAs to have Sh2 million car grant in order to pass the BBI Bill was the height of corruption.

“Let the government prepare enough budget to bribe Kenyans to pass the Bill,” he said.

READ ALSO  Sh431m love fraud: Kenyan woman could face up to 30 years in US jail

SAD: Kenyan woman, Selina Joseph Kithinji, passes away in US