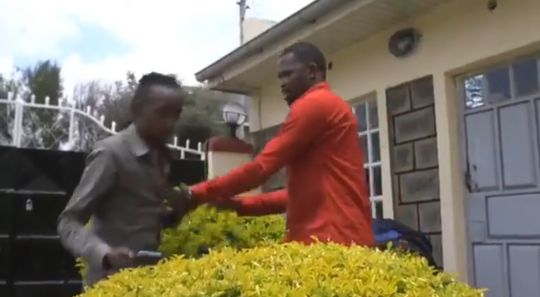 Churchill show comedian is squatting at his friend house after he was evicted from his bedsitter in Rongai.

The eviction happened on April 1 – April fools day – so most of his pals believe he was just pulling a prank.

“It is so funny, yaani, it is funny how even my fellow colleagues some of them think it is a prank. They think it is… niko tuu. That happened on April 1. Niko tuu, I have no idea what to do next.”

It was not a prank. I think people think because I’m a comedian and I like to joke so, it was a well-orchestrated prank to seek for clout. It is not.

Akuku Danger narrated how he was ambushed and thrown out of his house over three-month arrears.

“What happened was, niko na rent arrears kiasi, I stay in a bedsitter. beginning this year, I had not paid my rent for three months now, the landlord had been asking me for money, but I tell him to wait I will get a job and pay him.

He continued, “He did not accept my pleas, he thought like I will not be able to pay him. so on April 1 he came over. I just heard someone knock and he started to be aggressive and that is when he threw out the few things he could and told me to leave.

The comedian noted, “He locked up some of my things in the house but I told him I will pay him and come for the rest of my things. There is nothing much I could have done, I had a friend one mine who hosted me in Rongai.

I had rent arrears for Ksh 23,000. toward the end of last year, I had some arrears but I worked hard to clear them. There are no gigs, let me tell you,so sometimes you will get I pay one month I miss another, it has been tough.”

Did the landlord give you notice to vacate the premises?

“No there was no notice he texted me a while back saying, I leave his house because corona has affected everyone and he also has a family he is feeding, if I don’t pay him it means his family is also going to sleep hungry.”

The video that has gone viral of his eviction was taken by his pal who was in the house when the eviction happened.

Akuku Danger is looking for anyone who can give him a job, he has studied communications and PR.