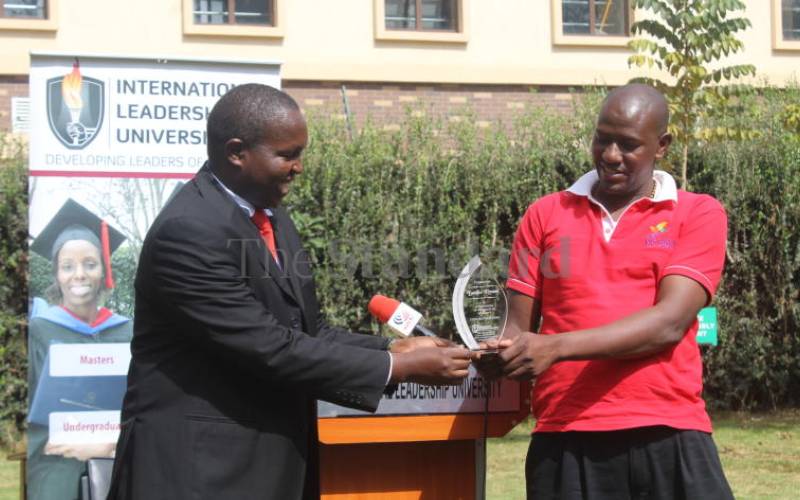 Famous poet and playwright, William Shakespeare once said, “To be honest, as this world goes, is to be one man picked out of ten thousand.”

And a matatu driver from Thika, Basilio Kimani, has proven this statement to be true. He is a rare gem.

The 40-year-old driver, who is attached to Kandara Sacco Transporters, which plies between Thika and Gatanga route in Murang’a County, has been honoured for his honesty and integrity.

It all started on September 5 when he picked an envelope and a laptop that a passenger had forgotten in his matatu.

Concerned, he kept the items safe as he sought to find the owner. He had no idea that his actions would shoot him to fame and recognition.

“On September 5, I had carried a passenger who boarded the vehicle at Blue Post-stage and sat with me at the front. When he alighted in Thika town, he forgot a bag which had a laptop, an envelope and a bag with food items.”

“Since he was a stranger and I did not have his contact, I opened the envelope, hoping to find any form of identification, but I only found Sh20,000. I took the items to our Thika offices and requested the staff to call me in case the owner came looking for their items,” he said.

Asked if he had been tempted to spend the money, Kimani, who has been a driver for 15 years and earns a mere Sh400 per day, said his principles couldn’t have allowed him.

READ ALSO  PHOTOS: How UDA's wave swept through the Kenyan Diaspora community in US

“I am a principled man. I believe in honesty. In fact, that day when I collected the money, my matatu had broken down and I only had Sh200 with me. I narrated the story to my wife and we agreed not to touch the money,” he said.

Luckily, two days later, a woman and a young man came to their offices inquiring about the laptop and the bag.

“When I saw the young man, I recognised him. He was in the company of his mother. The young man is a student at a local university and was elated that he had found his laptop. They thanked me and requested we take a photo together,” says Kimani.

The woman posted the photo on social media, thanking Kimani for his honesty and kind nature.

The photo circulated, with Kenyans thanking him, asking other matatu drivers and touts to borrow a leaf from him.

And that is how International Leadership University saw the photo and decided to fete Kimani for his good works.

Vice-chancellor Tim Kiruhi, said the university decided to celebrate Kimani because he showed integrity, which is what they teach and stand for.

“Our slogan is ‘Leadership with Integrity’. That is part of our vision and mission. We are proud of him. He has proved that there are honest people among us,” said Dr Kiruhi.

The university, apart from recognising him for his act of kindness with a plague of commendation, also launched the Basilio Kimani Integrity Scholarship Endowment in honour of him.

‘‘We appeal to members of the public to help raise the money for scholarships targeting needy students. Our first beneficiaries will be Kimani’s child, who will benefit until he is enrolled at any local university. We will also target other Kenyans, who portray honesty in their line of work,’’ said Dr Kiruhi, who committed Sh250,000 towards the fund.

And to close the recognition ceremony at the Kilimani campus, a cake inscribed; “Congrats Basilio #IntegrityChampion”, was cut to celebrate him.

Kimani wishes to one day own a pick-up and start his own business of importing onions.