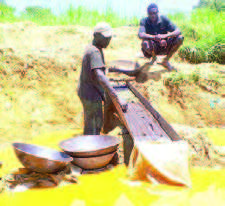 The resumption of operations by a gold mining firm that had been shut down for the previous two years due to an arson assault has raised hopes in the North Rift.

During the attack on the Karebe Gold Mining Company in Tinderet South Sub-County, Nandi county, property worth millions of shillings was destroyed. Following the event, which resulted in the destruction of automobiles, homes, and other property, more than 400 workers were sent home.

However, the company has since resumed operations and moved to an eight-acre plot of property it recently acquired, where it has built a multibillion-shilling factory to crush and process gold and other minerals.

Albert Kiplimo, the administrative manager of the company, claimed yesterday that all of the company’s employees had been recalled, even as he urged the government to safeguard investors. He said that the business suffered losses amounting to billions of shillings.

He asked security organizations to deal with illegal gold miners who, according to him, were shielded from harm by powerful politicians.

“President William Ruto has been traversing the world seeking investors. It is sad that here in Tinderet, illegal invaders are causing trouble,” he said, adding: “These illegal operators don’t pay taxes yet are interfering with true investors”.

READ ALSO  Mudavadi's step-mother dies in the US
Related Topics:News
Up Next