Horror as Butere Hospital leaves bodies among patients in wards 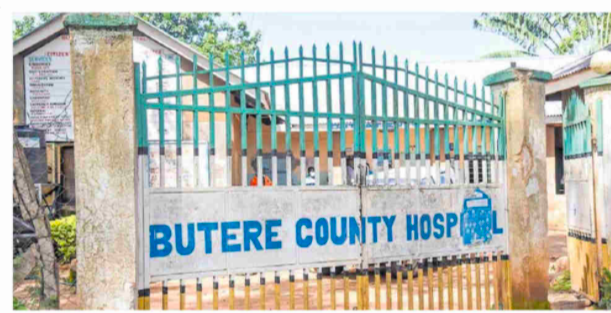 When Yusuf Manyasa was admitted at Butere Sub-County Hospital in Kakamega on Sunday, he had no idea what awaited him later that day.

Mr Manyasa had suffered a severe bout of malaria and was admitted in the male ward on Sunday afternoon.

He later learnt that he would spend the night with the body of a patient who died on Saturday and was left unattended by medics. Before he arrived, three other patients had to share the ward with the man’s body for a night.

Shockingly, they were not alone. The body of a boy was also left lying in the paediatric ward. The boy died on Sunday.

It was only after Mr Manyasa posted a video of his ordeal on social media on Monday that the two bodies were collected and taken to the Kakamega County General Hospital mortuary.

But this is not the first time that Butere Sub-County Hospital is in the spotlight for all the wrong reasons. From past allegations of mistreatment of patients to lack of basic facilities, the hospital, which is in a deplorable state, seems unable to shake off its bad reputation.

In May 2021, The Nation reported that HIV patients at the hospital were being mistreated. This was after a man who was receiving his ARVs from the hospital took his own life, allegedly after a horrendous experience at the hands of medical staff.

His death put the hospital on the spot yet again amid claims that HIV patients were stigmatised, discriminated against and humiliated.

His wife later revealed that it was the fourth time her husband had been denied drugs and mistreated by the health workers.

He had revealed to her that he was feuding with nurses over his rising viral load and they faulted him over his ARV uptake. She said health workers did not bother to find out why his condition was ‘abnormal’ and instead kept insulting him and eventually denied him more drugs.

In the latest incident, Mr Manyasa, who hails from Shishebu village in Marama South, posted a video of his ordeal with the bodies in the ward.

“There is a body of a middle-aged man decomposing in one of the male wards at Butere sub-county hospital. The guy died two days ago but is yet to be moved from the ward,” the patient wrote on his Facebook page, putting elected county leaders on the spot.

Health executive Dr Collins Matemba said he learnt about the story from social media and was yet to receive official communication from the hospital’s management.

“I saw it on social media and dispatched a team to the ground but I am yet to get their feedback,” Dr Matemba said.

The revelation drew criticism from various quarters, with some calling for the closure of the hospital and personnel being faulted for their treatment of patients.

READ ALSO  British Embassy: What we are doing about Covid-19 cases in Nanyuki military base

“They are harsh with a don’t-care attitude and have no sympathy for patients,” claimed Ignatius Were.

“While quality healthcare should be a priority for the people of Kenya, the condition at Butere sub-county hospital is pathetic. It’s better the hospital is suspended from operating until further notice,” said another resident, Kevin Etemesi.

Hospital administrator Hillary Kiverenge did not make things any better when he spoke about the matter, revealing that he only learnt about the bodies on Monday.

He said the presence of the two bodies in the wards was as a result of miscommunication among hospital personnel.

“I learnt about the bodies lying in the wards today morning (Monday) yet it is alleged that the bodies have been here since Saturday. I would have borrowed a vehicle from our neighbours to move them to the mortuary,” he said, confirming that the hospital lacks a holding room for bodies.

Mr Kiverenge said his hands were tied and they had nothing better to offer to patients.

“We have not received any supplies since the beginning of the year. We totally don’t have non-pharmaceuticals and all our vehicles have broken down,” he said.

“We are short on resources and it results in delays in transporting the dead to the morgue. But we are trying our best to provide services. These issues will be solved in the coming days.”

Dr Matemba, however, expressed his doubts about those claims, saying a body that had stayed unattended for two days should have decomposed and been stinking.

“Services in our hospitals are totally down and anybody can say anything,” he added.

He blamed the problems in public hospitals on delays by the National Treasury to release funds to counties.