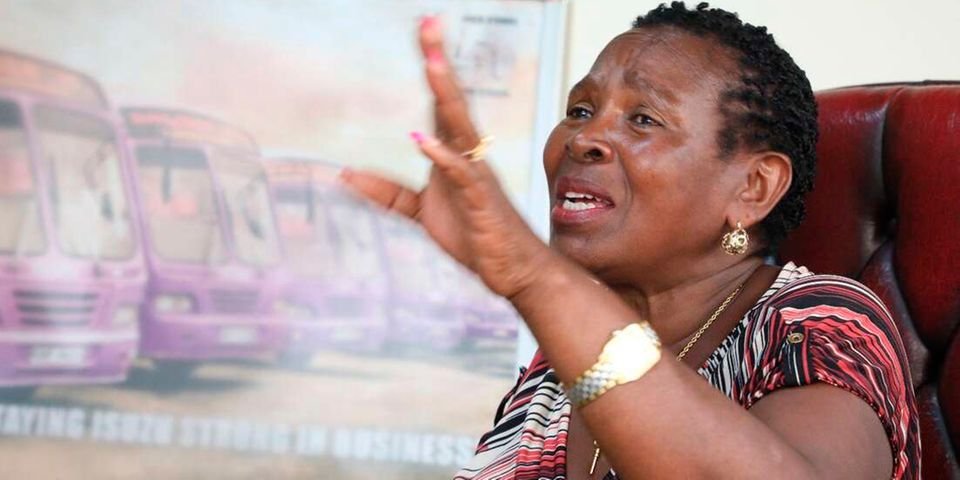 Looking outside the window from the first floor office of Mary Mwangi, the director of Express Connections, you get a glimpse of the business empire she heads.

Beyond the compound’s tall gates, numerous of the company’s purple “Double M” buses are parked in a yard not too far from view. Vehicles come in and out of a petrol station occupying a section of the property beyond the fence. On Kangundo Road, which is a stone-throw away, vehicles race up and down.

In a few days, Mrs Mwangi might lose this office and the 4.37 acres of land it sits on. For good.

As per an auctioneer’s notice that has run on two consecutive Mondays, Express Connections will lose this property at the fall of the hammer on October 5.

“Erected on the land parcel are two office blocks, a go-down used as a garage, a cafeteria building, an ablution block, a generator house and a sentry, two containers … part of the property constitutes a petrol station,” reads the notice from Philips International Auctioneers. “Auction is on Tuesday October 5 at our offices along Kandara Road.”

But it will not go without a fight.

Speaking to the Sunday Nation in her office on Friday, as the news about the pending auction circulated far and wide, Mrs Mwangi was resolute about two things. One, that the Double M buses are not part of the collateral that a local bank is after.

“Passengers have no need to worry,” she said.

Two, that it is not due to mismanagement that an auctioneer had to be called into her property. Rather, it is what she called a “chain of frustrations”.

The short story is that she used the property as collateral to obtain a loan for a parcel of land in Mavoko where the seller was to build a hotel targeting Jomo Kenyatta International Airport users. She already had a name for the hotel — Sir John — in honour of her husband John Mwangi who died in 2011. But when the 80-room, four-storey building was completed, she realised that it was built so shoddily that it was unusable.

READ ALSO  ‘How much for my kidney?’ Tops KNH’s FAQ list as cost of living soars

There were cracks all over. The issue ended up before an arbitrator who found that the contractor breached an agreement signed to govern selling the property and building the hotel on it. As such, they were ordered to refund Mrs Mwangi’s company Sh216.2 million plus interest.

The company has been challenging that award since 2019. As they tussle in court, time has caught up with Mrs Mwangi and the bank that loaned her for the hotel has grown impatient, ordering auctioneers to go after the Kangundo Road property.

So, this has nothing to do with her unsuccessful campaigns to be the Embakasi East MP? Mrs Mwangi vied for the position in 2013 and 2017. Conjecture is that she burnt business money in campaigns.

“What people don’t know is that even when my husband was alive, I vied for a position in Gachoka constituency. I feel like people are insensitive,” she replied.

Her desire to be an lawmaker, she noted, is to ensure she articulates matters concerning the transport industry, which “no MP has ever addressed”.

“What I have been doing (bus transport) has had no representation at all, and that is why we go from bad to worse in the industry,” she explained.

Mrs Mwangi’s had a grand dream for the hotel, which is now a nightmare. Her experience is an indictment on government systems, especially those that govern approval and supervision of new buildings.

On August 21, 2016 when the Sunday Nation first reported on the matter, she had just instituted legal proceedings against the developer, Easy Properties Limited, whose director is Pamela Bwari.

At the end of that process three years later, it was a resounding win for Mrs Mwangi before lawyer Allen Gichuhi, the arbitrator who handled the matter. Before making his 115-page verdict, Mr Gichuhi had an expert assess the building.

“The building is not fit for occupation or purchase and the agreement for sale dated October 10, 2012 be and is hereby rescinded for breach of contract,” he said in his verdict of October 22, 2019.

Mr Gichuhi ordered that as soon as Easy Properties finished the payment, Mrs Mwangi’s company would then transfer back the property and the defective building to Easy Properties — which would basically be reversing the purchase.

But Easy Properties were aggrieved. They challenged Mr Gichuhi’s verdict at the High Court, where they also lost. A few days ago, on September 7, Justice John Mativo dismissed a case by Easy Properties and affirmed Mr Gichuhi’s decision. “The final award delivered by the Hon Arbitrator, Advocate Allen Waiyaki Gichuhi, be and is hereby recognised and adopted as a judgment of this court,” the judge ordered.

Mrs Mwangi, however, had little time to celebrate because that following Monday, the first advertisement about the intended auction ran in the newspaper.

“It did not go down well,” Mrs Mwangi said. “All along, I had made sure to communicate with the bank on the arbitration process. I even kept on paying the loan facility even without it working for me, up to when Covid-19 hit then everything went down.”

On Friday, Mrs Mwangi said she had instructed her lawyers to challenge the intended auction in court.

READ ALSO  Uproar over transformer in the middle of Nairobi Expressway, KeNHA responds

Meanwhile, Easy Properties has filed a notice of appeal, seeking to challenge Justice Mativo’s judgment. That means the fight over the hotel will now be at the Court of Appeal. “It has been a chain of frustrations,” said Mrs Mwangi.

“Many people who have known my issue tell me, ‘If it were me, I would have been dead.’ I can’t die, because I worked to be where I am. December 2021 will be my 22nd year doing business in this beautiful country. But I feel the government needs to change the way it does things,” she added.

In the end, her dream of having a hotel in honour of her husband, who died on Christmas Day in 2011, will go up in smoke.

“He left us some money, a good Sh40 million. I felt that that was the seed I would plant in a facility that would outlive us; such that when we are long gone, people would still be reading about Sir John,” she said.

That the Express Connections empire is wobbling is evident. Besides the disputed Mavoko building, Mrs Mwangi has in the past few years lost four buses in the Double M fleet due to what she describes as unscrupulous insurers who turn matatu owners into pawns as authorities nap.

“Four of my buses have been sold, not because I never paid the monies that were financed when I went for the buses, but because of a failed insurance company,” she said.

Lashing out at the Insurance Regulatory Authority for being “toothless”, she said there are issues about matatu insurers that need ironing out.