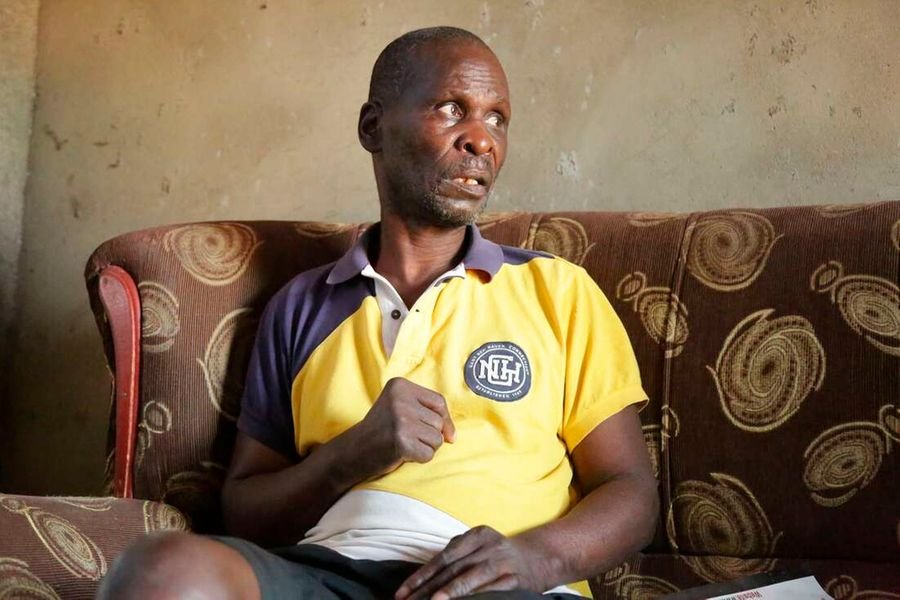 After nearly four decades of suffering in silence, the family of one of the architects of the 1982 abortive coup has finally come out to speak about their harrowing experience.

Just after five years of service, the budding career of Joseph Ogidi Gundo was nipped in the bud following the events of the ill-fated day.

Then decades later, a debilitating stroke in 2019 left him paralysed down the right side of his body. He also lost his speech.

The family had to look for someone to take care of the man who had taken a vow to protect his country from external aggression.

“We have been to hell and back,” said his mother, Cornelia Achola, who at 95, has indeed seen everything.

Mr Ogidi was based at Nanyuki Air Base and had been propelled by the influence of Sergeant Joseph Ogidi Obuon, his maternal uncle. Sergeant Ogidi and Senior Private Hezekiah Ochuka were court martialed for being the masterminds of the attempted coup.

On the day Sergeant Ogidi was condemned to death in 1983, he requested that his family be allowed to attend the session of the court martial at Lang’ata Barracks.

“This marked a painful beginning of our tribulations and family disintegration as bearing the name ‘Ogidi’ suddenly turned to be a curse,” said the frail-looking Cornelia at her Oruba home in Migori County.

For sharing the name with his uncle, the junior Ogidi was also associated with the renegade soldiers who wanted to overthrow the government.

“His sentencing to three years at Shimo La Tewa Maximum Prison in Mombasa was a double tragedy for me. It was too painful,” said Cornelia.

In the ensuing months, Ogidi’s wife deserted her matrimonial home with their two children.

Fortunately for the family, their son did not complete his sentence and was released through a presidential pardon two years after it was established that he was not directly involved in the attempted coup.

Despite securing his release and being cleared of any wrong-doing, the young Ogidi was not awarded any compensation for unlawful detention and termination of employment.

Broke, dejected and depressed, he got immersed in his own problems and would later find solace in alcohol.

“When my brother was released, he developed some peculiar tendencies and preferred squatting or kneeling, while any discussion of what happened to him would trigger his emotions as he sobbed like a baby,” said his elder sister, Ms Benta Omondi.

They later established that the torture and harsh conditions he encountered in detention had made it impossible for him to have children anymore.

One morning in 1998, the family was elated when they learnt that Ogidi’s wife had accepted to return home. What they didn’t know is that she was terminally ill.

“She was here by midday, but was very sick and could not even sit down. She died two hours later and was buried here,” recalled the mother.

Their two daughters also lived miserable lives and ultimately died of complications related to HIV and Aids later on.

Since Ogidi did not have a national identity card and had failed to secure any form of employment, he resorted to repairing bicycles in Migori town to make ends meet and provide for his elderly mother.

Due to his meagre income, he could not afford to build a house and he lived in his mother’s tiny kitchen until he was 59-years old. It took the help of his younger brother and elder sister to build him a modest house in his mother’s compound.

Cornelia said the sentencing of her brother (Sergeant Ogidi) to death jinxed the family as diseases, misery and instability crept in after she was ostracised by the community.

“I have never known happiness since my only sibling was condemned to death by the court martial,” she said.

The only memory left of Sergeant Ogidi is a single photo of him dressed in an Air Force uniform.

“I remember my brother’s first wife, her daughter and my eldest daughter, who lived with her uncle in Nanyuki, arrived at our Migori home on the evening of July 31, 1982,” Cornelia recollected as tears rolled down her cheeks.

Ms Benta, who was a Form One student at Mt Kenya Secondary School in Nanyuki, said their trip home was abruptly planned. “From Nairobi, my uncle put us on a Migori-bound OTC bus,” she told the Nation.

Reports indicate that the key planners of the coup at Laikipia Air Base and Moi Air Base decided to send their families to their rural homes for safety.

Born in 1949, Sergeant Ogidi was originally from Kolwa (Kano) in Kisumu County, but opted to settle in Migori with his three wives.

Due to his love for family, he tagged along and helped his elder sister secure a piece of land near his Oruba home, where they stayed together after the death of their parents.

“My brother was generous to a fault and had a heart of gold,” narrated Cornelia.

The sergeant’s only surviving wife, who left after his execution, returned to her Oruba home after 30 years. Mrs Teresia Ogidi, who was married in 1972, was helped by her step-children to rebuild a house where she lives in solitude.

Due to the fact that Sergeant Ogidi’s children were brought up by different relatives, two out of the three sons have chosen to look for alternative land while one is yet to settle.

Trip To The Moon For The Kenya Airlift Student