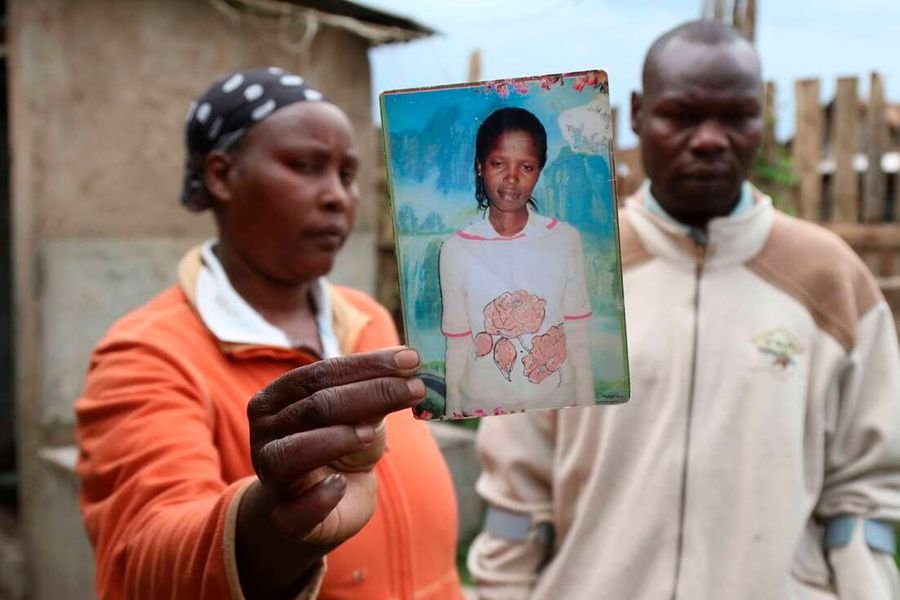 Kenyan authorities stood by and watched as the British Army covered up the heinous murder of Agnes Wanjiru in Nanyuki nine years ago.

A British soldier, or more, under the British Army Training Unit in Kenya (Batuk), is believed to be behind the killing, and the military covered up the crime, allowing one of their own to get away with murder.

It has taken nine years for the truth to come out, and both the Kenyan and British authorities played a part in denying the victim justice.

New evidence shows that the British Army covered up the matter until the suspected killers left the country, while Kenyan authorities delayed and blocked investigations into the foreign soldiers.

Investigative material acquired by the Nation reveals the grim picture of how Wanjiru, a 21-year-old mother of one, was beaten, stabbed and dumped inside a septic tank, possibly while she was still alive, and how the case was swept under the rug. The documents also reveal the identities of nine British soldiers who were at Lions Court Hotel in Nanyuki at the time of the murder.

Not even a court-guided inquest into the death of Wanjiru has yielded any action to bring her killers to book. And while delivering her decision on November 5, 2019, Principal Magistrate Njeri Thuku expressed scepticism regarding whether any action would ever be taken to hold Wanjiru’s killers accountable.

“It is possible that even after stating a decision in this opinion, no action may be taken by any of those charged with doing so. If that be the case, then those who know the fate that befell Agnes on the night of March 31, 2012 shall be in the Hound of Heaven,” she said in her ruling.

True to her prediction, two years after the inquest was closed, no action has been taken, either by Kenya or Britain.

In her decision, Ms Thuku pointed out how investigations dragged on for half a decade as police witnesses revealed how diplomatic hurdles set a killer free.

Wanjiru disappeared in March 2012, and her body was discovered in the septic tank in June, two months later.

READ ALSO  Mimi ni mjanja! My son is a US citizen - Pastor Ng'anga

A post-mortem was conducted in June 2012 but it would take more than a year for a toxicology report to be prepared on April 5, 2013.

Crime scene photos would then be produced another year later, on April 24, 2014, despite being taken the day the body was discovered.

Three years later in January 2017, the Director of Public Prosecutions ordered police to open an inquest file into the death of Wanjiru.

The file was presented to court more than a year and a half later, in October 2018.

Witness accounts show that Wanjiru was last seen in the company of uniformed British soldiers at Lion’s Court Hotel. She, and other women, had met with the soldiers who were out on a night of binge drinking and sex with local women. It would later emerge that the soldiers had, in fact, sneaked out of their barracks.

During the inquest, the court heard that Wanjiru was seen entering one of the rooms with two soldiers.

A worker at the hotel reported hearing a commotion coming from the room, and even heard glass breaking.

The following morning, the soldiers had left and Wanjiru was missing.

Court documents show that broken glass and blood was found in the room Wanjiru was last seen entering in the company of the two British soldiers.

Hotel staff and management at Lions Court took no action. This was the first step in the cover-up at the Kenyan level.

The hotel manager, Mr George Njuguna, testified during the inquest, claiming that he was not aware Wanjiru had been at the hotel, and only learnt of her when her body was pulled out of the septic tank.

This was, however, questioned by the magistrate, who accused the hotel management of a cover-up.

“I find it hard to believe that the management of a hotel would find it usual to find broken glass and blood in a room. This points to signs of a cover-up of a misdeed committed in their premises and should be subject of investigations by the DPP,” the magistrate noted.

In an exposé by British news outlet The Times, a soldier allegedly confessed to killing Wanjiru to his colleagues, and dumping her in the septic tank adjacent to the room she had been in.

The matter was allegedly reported to Batuk’s senior command and the Royal Military Police, but the whistle-blower was instructed to remain quiet and drop the matter.

After two months of searching, the decomposing body of Wanjiru was found in the septic tank.

By then, the soldiers who had been at the hotel on the day she was last seen there had already left the country.

In the initial stages of the investigation into the death of Wanjiru, the former Nanyuki OCS, Chief Inspector of Police Mohammed Jerumani, took point. He had received a report from the hotel manager about the discovery of a body.

It would then emerge that the body was of Wanjiru, who had been reported missing two months earlier.

Mr Jerumani assigned the case to an officer identified as Corporal Jabali with whom they sought to question Batuk’s leadership regarding the identity of the soldiers who were at Lion’s Court Hotel on March 31, 2012. They intended to question the soldiers but were informed that they had already left the country.

The officer told court that there was communication between the British High Commission and the office of the Attorney General at the time. There had apparently been plans to have the soldiers questioned over video link.

There is no evidence whether the soldiers were ever questioned but some of them who spoke to The Times claim they have never been questioned regarding the murder, by either Kenyan or British authorities.

Nine soldiers from the 2nd Battalion- Duke of Lancaster were named as possible suspects and witnesses because they were at the hotel at the time.

Another soldier, only identified as Higgos, also booked into the hotel, but his sign-in form was never presented to court. The hotel management could not explain how the form disappeared.

It also emerged during the inquest that Wanjiru might have been alive by when she was dumped into the septic tank.

Pathologist Obiero Okoth, who conducted a post-mortem on Wanjiru’s body, told the court that she had two notable injuries — a blow to her chest and stab wound in the abdomen. He, however, noted the injuries were not enough to cause death immediately, meaning she might have been alive when she was thrown into the septic tank.

In her conclusion, Principal Magistrate Thuku said Wanjiru was murdered.

“There is a belief in many parts of the world that the blood of the innocent cries out from the ground. It may be the case for Agnes. It has taken more than seven years for the family of Agnes to find closure regarding how she died,” she said.

The inquest findings were served to the office of the DPP and the Attorney General for action in November 2019 for action. So far, no action has been taken.

Meanwhile, her family is still seeking answers about her murder. When the Nation visited the family, Wanjiru’s elder sister Rose Wanyua was reluctant to grant us an interview following the new revelations on her death.

Later, Ms Wanyua and her husband John Muchiri opened up and narrated what they have undergone since Wanjiru’s body was found.

The couple helped raise Wanjiru since she was in Standard Three, and lived with her until she got to Form 3, when she dropped out of school after getting pregnant.

Wanjiru’s daughter Stacy was then was nine months old.

“Baby Stacy was crying uncontrollably, but she was too young to comprehend what had befallen her mother. We couldn’t imagine that we had lost our kin in such a heinous manner. However, there is a ray of hope,” Ms Wanyua said.

Now 10, Stacy is a Grade 4 pupil at a school in Nanyuki town. Her aunt said the girl’s school fees was paid by a charitable organisation until recently when the sponsorship ended.

“We do not have finances to pay for her schooling. We are appealing for assistance,” she said.

Mr Muchiri, on his part, urged the government to expedite investigations into the matter and unearth what transpired on March 31, 2012.