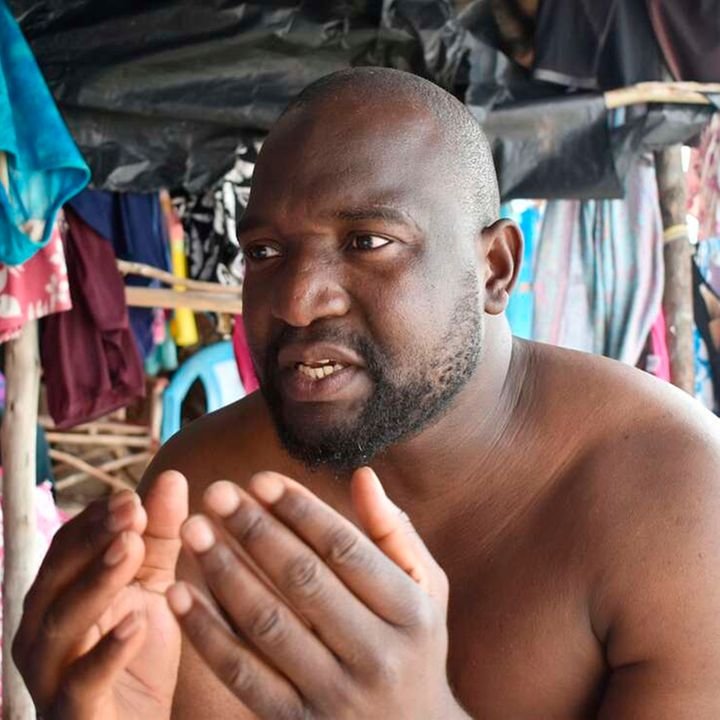 On the white sandy beaches of Diani in Kwale County, a group of beach operators is busy pushing a glass boat, commonly used for marine tours, from the shores to the water just as the tides is rising.

As the boat floats in the low tide, the group walks in one direction, led by one of them who is slightly tall, shirtless and well-built. He stands out from the rest.

“Hello mate,” he greets us with a British accent. This is despite him communicating with the rest in the local Digo dialect of the Mijikenda tribes from the Coastal region of Kenya.

Seif Matano, 42, who was once a beach operator, commonly known as ‘beach boy’, in Diani, is now an international tourist after love swept him off his feet.

He is back in the country for a short period, as he does every year with his wife, a British citizen. A place that he once called home is now his holiday destination.

But how did this happen?

One afternoon changed his destiny, seeing him move from Kenya to the United Kingdom. He is now a resident of Pittsburg.

“I was busy with my usual businesses of convincing clients to board a marine boat at the beach, when one of my friends called me, pointing at a foreign lady. She was resting on a beach bed, in the company of two other ladies,” he says with a smile.

Curious, Matano moved ahead and responded to the woman’s call. What followed was a conversation that turn his life around.

“We talked for some time, and she said she was interested in finding a friend who could guide her around the area. I accepted her request and we later became close friends,” he says.

Unfortunately, the holiday season came to an end and his newfound friend had to go back to England.

Unexpectedly, the woman came back to Kenya after one week, looking for Matano, who had gone back to his usual life as a beach boy.

“I was not surprised. By the time she was leaving, she had already started showing signs of interest in me. I was young then, with a dark skin and handsome. I used to exercise, so my body was toned. That was enough to make her attracted to me,” says Matano.

The tourist stayed in Kenya for three more weeks. After one month, she had to go back to her country, leaving Matano behind. But they kept in touch.

“I liked her. I loved being around her. She would visit frequently,” he says.

Two years later, she proposed that they move to London.

However, Matano, a Muslim, suggested that they get married first, which they did.

“She even converted to Islam, calling herself Mariam Seif. In our new life, we went to England together as a couple,” he says.

In the past 15 years, they have been visiting Kenya twice a year.

“Kenya is a beautiful place. Twice yearly, I organise for holidays here for the two of us. We always spend our time in our favorite four-star hotel around Diani,” he said.

Matano’s wife had to learn to cook Kenyan food, something he brags about. “She can now cook chapati, ugali, sukumawiki and pilau.”

The couple has visited many countries. Even though as a beach operator he had learnt several foreign languages and now adding to his list, he knows Polish.

“I did not know that my life will change like this, but I know it’s my hard work,” he says.

He has since invested in Kenya, and owns a glass boat, employing his friends who used to work with him at the beach.

He believes that the title ‘beach boy’ for those operating on the beach tarnishes their image, since there are many who run genuine businesses there.

Apart from the obvious merchandise and services sold on the beach, some of the not-so-overt, but popular services, include sex tourism.

Matano says most of the locals thought he would get a divorce and return to the country after a few months, a common thing, he says, that happens to the beach operators who begin life with tourists abroad.

“When you live abroad. You cannot stay without a job or business. You must have something to do to have an income. Life is so expensive,” he says.

He still retains the business he was running in Kenya, a glass boat that is operated by his friends.

Related Topics:NewsSeif Matano
Up Next