How family was wiped out in Christmas crash 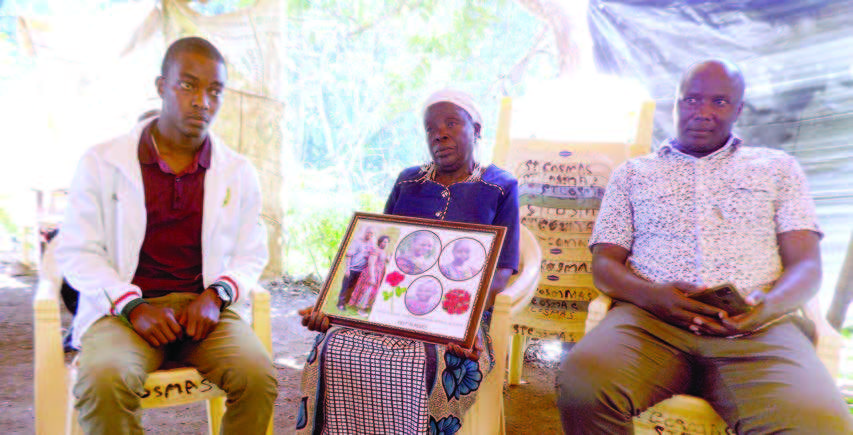 An early morning phone call on Christmas Day has turned the life of Yuventina Moraa Mauncho upside down.

Moraa, a widow, was preparing to attend the Christmas Mass at Nyakegogi Catholic Church in Bobasi, Kisii County, when she received a call from her daughter, Fridah.

“I suspected nothing when she asked me to pass the phone to Casmir Nyabuto, my first born son,” Moraa recounts, struggling to hold back tears.

“It was Casmir, who after a brief conversation with Fridah, broke the terrible news to me. I was devastated when he told me that Ronald had been involved in an accident. It forced me to stay at home as I waited for more information,” said Moraa, adding that at the time details about the accident were scanty.

Ronald Bundi Mauncho, 43, was travelling to his Kisii rural home with his wife and five children in the family car, a Subaru legacy, when he collided head-on with another car coming from the opposite direction at Mackinon area on the Nairobi Mombasa highway at around 7.30am.

According to eyewitnesses, Ronald, who was driving, died on the spot alongside his two daughters, Natalia, 14, and Clare, 7, while his wife, Veronicah Ogake (40), Marion Moraa, 17, and two sons, Mike, 10 and Venand, 3, suffered serious injuries and were rushed to an hospital in Voi before being transferred to the Coast General Hospital.

Veronicah would succumb to her injuries while undergoing treatment three days later while Marion, a student at the Star of the Sea Secondary School in Mombasa, died on December 31.

Mike and Venand are fighting for their lives at the hospital.

Speaking to a local publication at the family’s Nyakegogi home, family spokesman Paul Ogega narrated events leading to the tragic accident that has thrown the quiet village into mourning.

“Ogake was a member of our group, Young Investors, in fact she was the treasurer. I talked to her on December 24 at around 10pm and we shared a lot about our group,” Ogega said.

He said he received a call from a person who identified himself as a police officer at around 7.30 am on Christmas Day.

“Do you know Veronicah,?” the caller asked but before Ogega could respond, his phone went off, prompting him to get a power bank and recharge it before calling the officer who told him that Veronicah had been involved in a road accident.

Ogega immediately called his friend, Joel Kipchirchir, a police officer who told him that the victims had been taken to Moi Referral Hospital in Voi, adding he consulted a medical officer in charge of the facility who allowed the officer to take photos of the survivors, Veronicah, Marion, Mike and Venand, and shared them with family members via WhatsApp.

“Moi was overtaking four trailers along the road at Tsavo game reserve. It was foggy, the road is narrow and visibility was poor,” Ogega said, referring to Ronald by his village nickname drawn from the fact that he was born in 1978 when Daniel arap Moi became president.

He added: “From Voi, the victims were transferred to Coast General Hospital where she (Veronicah) died while Michael and Venand are recuperating. All the bodies are lying at the Jocham private hospital morgue in Nyali awaiting burial at Nyakegogi village this Friday.

“Moi was the family pillar. He is the one who was feeding me. His sudden death is a big blow to our family. I will suffer,” a grief stricken Moraa, the mother, said of her last born son in a family of eight, four daughters and four sons.