How fraudsters took Sh3m from account of a dead reverend 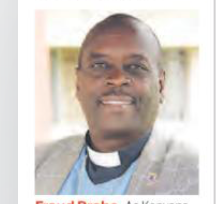 As Deputy President William Ruto was leading friends and family in burying PCEA secretary general Rev Peter Kania in July last year, something strange was happening in the background.

The bank accounts belonging to the deceased were being swept clean by fraudsters.

It took the family 14 days to discover that Sh3 million had been withdrawn from the bank accounts. The fraudsters had also applied for a loan of Sh500,000.

The money was moved from the bank accounts through mobile cash transfer service.

The matter has since been reported to the DCI and investigations have started.

According to the investigators, transfer or cash started only hours after the news of Kania’s death was confirmed on July 26.

When Kania died, the family decided to switch off his cellphone.

After two weeks, the widow decided to switch the phone on since she knew the PIN but she was taken aback when she could not access its contents despite having the right PIN.

Armed with a copy of the death certificate and an affidavit, the family decided to check with a mobile service provider what the problem was.

It is then that the family was informed that the line used by the deceased was still in use.

The family was informed that the line had been used to conduct numerous financial transactions.

This revelation shocked the family and they were in for more shock when they got the financial details from two  banks where Kania had accounts.

Despite the accounts having been emptied, the operators had also made a loan  application for Sh500,000.

The family filed a report at the DCI Cybercrime Unit and investigations commenced.

On Thursday, the DCI arrested a former bank employee and a clerk working at the National Registration Bureau in connection with the bank withdrawals.

The two men are said to be the new faces of a racket dealing with identity theft and also theft of cash from accounts of the dead.

According to the investigators, racketeers pick their targets from the obituary pages of local newspapers. They are keen on prominent and wealthy individuals.

Once they have identified their candidate, they proceed to find their mobile numbers.

Once they have secured the cellphone number, they use their network that spreads all the way to Registrar of Persons where they get further details such as identity card number and date of birth which mobile service providers require when registering a line.

After securing this information, they call the mobile service providers pretending to be the owner of the line (the dead man) and report that they have lost their phone and require a new line.

At this point, they know that the service providers ask basic questions such as ID number and date of birth which they already have.

And with that, they are issued with a new line.

How do they know the personal identification number?

Investigators say from their experience in the banking and IT, they have established that many people use the last digits of their birth dates or ID card numbers as their passwords.

And by chance if your PIN is your date of birth or digits of your ID, their work is well made easy.

READ ALSO  Family still agonizing over missing teen in the US 'he said he was letting us down,’

They can now freely access your banks and mobile money lenders at will.

Police spokesman Charles Owino said that is just fraud and it does not matter who the target is. “It’s simply fraud which the DCI will investigate.”

Related Topics:NewsPeter Kania
Up Next

From Jomo to Uhuru: The life and times of Yusuf Haji

VIDEO: Clearly drunk Kenyan Supreme Court Judge brags about studying in the US at a funeral