How ‘I lost cash’ in fake laptops tender 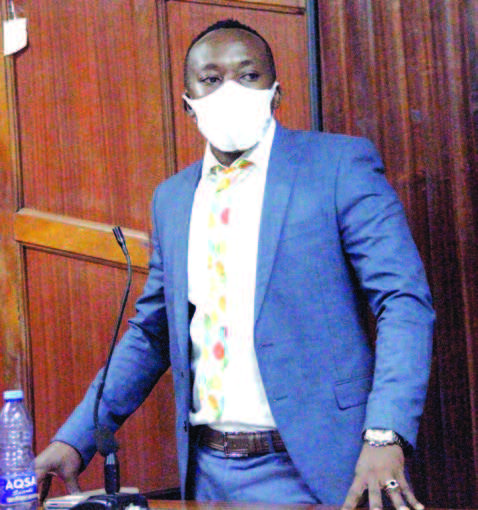 When Charles Kamolo Musinga heard that Makindu Motors, a company he co-owns with businessman Stephen Ngei, had been shortlisted to supply laptops to the Deputy President office, he was overjoyed.

Musinga through their friend Augustine Matata, would then meet a woman introduced to him as “Ms Muhoro”, in charge of procurement business at the office of Deputy President at Ole Sereni Hotel on Mombasa Road, Nairobi. “Ms Muhoro also said she was the secretary of a Mr Wanyonyi who was the personal assistant to the DP,” Musinga narrated to the court yesterday.

On May 30, 2018, Musinga, Matata and another friend Solomon drove and arrived at Harambee Avenue at 8am, parked their car and sat at a Java restaurant, adjacent to the DP’s office as per Ms Muhoro’s instructions awaiting her call.

“After staying for a while at Java she called and told us to go to the office of DP, we used a side entry, the officers at the gate asked us where we were going. It was then that a person came and told them we were with him, he picked us and took us to the third floor using a VIP lift, we were taken to office number B3-005,” he told the court.

READ ALSO  From picking pockets to stealing hearts through music

In the office, they found Ms Muhoro seated and she affirmed they had been shortlisted to supply laptops for Devolution ministry and gave them non-disclosure agreement.

According to Musinga, being taken to the DP’s office made them believe the tender they were eyeing was genuine. At a later date, they met Ms Muhoro at a hotel in Karen where she al legedly demanded Sh500,000 as her facilitation fee which they gave her.

On June 19, they met her again but this time she was in the company of her “boss Wanyonyi” at the Mombasa Road hotel where she gave them the Local Purchase Order which indicated they were to supply 2,800 laptops. Wanyonyi is one of the accused persons in the case.

They found a supplier and were instructed by Ms Muhoro to deliver the first batch of 145 laptops at the Treasury building. “We were flagged by uniformed police and when they inquired we told them we were bringing the DP’s laptops and they said they were aware and let us through… We uploaded the goods and there were uniformed policemen to confirm the order,” he told the court.

They were directed to the eighth floor where they met Christian Mwendwa who signed on the delivery order.

Since they could not get more laptops of HP 7th generation, they requested that they could substitute them, which was granted. They supplied the second batch of 587 pieces which they were directed to deliver to a “Mr Kiptoo” who was said to be another PA to the DP at an office in Eastleigh estate.

According to the prosecution, Kiptoo is Allan Chesang who is the first accused person in the case. The court heard that Kiptoo alias Chesang came with a police escort, driving a top of the range Range Rover KCJ1 with stickers of the National Assembly and the office of Deputy President. Chesang also collected the third batch of 500 pieces and the fourth of 620 pieces using the same method.

Musinga told the court that af ter they delivered all the pieces, Miss Muhoro and Wanyonyi invited them to Ole Sereni hotel and told them they had done a good job and that they would give them another tender to supply ambulances. Ngei would later call him saying he had information that the tender was a scam and that the said laptops were being sold in the market.

They met the next day and decided to go to the market where they purchased some of the laptops and confirmed that the serial numbers matched those of the laptops they had supplied to the government.

Ngei later got wind that some of the laptops were hidden in Chesang’s office which they raided with the help of the police and recovered them.

Balala: We have unsuccessfully tried to get Lupita for five years now for tourism job