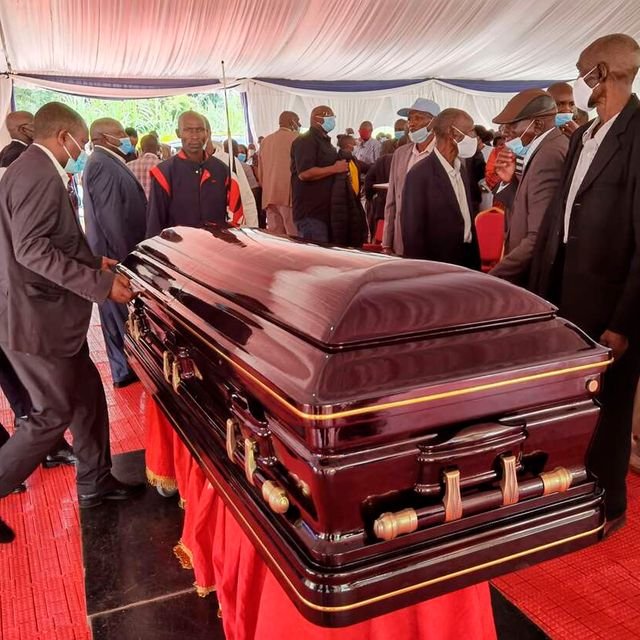 In this world, nothing can be as certain as death and taxes, to paraphrase Benjamin Franklin’s letter to some French Physicist in 1789.

That dying is inevitable and universal is an undeniable fact of life, but how communities conceptualise the grim ripper or deal with its aftermath is up to their culture and religion.

On Monday, Kenyans could not help but notice the perfect contrast in the burial rites accorded to two powerful politicians who in life had intertwined career paths and amassed vast wealth.

One was Simeon Nyachae and the other, Yusuf Haji, both of whom shared immense administrative influence in the golden age of the provincial administration, and later served in the Cabinet.

President Uhuru Kenyatta led Kenyans in paying the last respects to Mr Nyachae in a more than 5,000 capacity-filled stadium in Kisii, 14 days after the former minister succumbed to a long illness at a Nairobi hospital. He was 89.

Later that day, Mr Kenyatta dashed back to Nairobi in time for the send-off of Garissa Senator Haji, who chaired the Building Bridges (BBI) Taskforce and breathed his last at the Aga Khan Hospital, Nairobi, aged 80.

In accordance with Islam, Mr Haji was buried the same day at the Lang’ata Muslim Cemetery, notably without the pomp and colour or lengthy procedures and speeches witnessed earlier at the Gusii Stadium.

The two wealthy and elite men, who exercised immense political influence in their communities, but of different faiths, demonstrated how one’s beliefs greatly determines one’s last journey on earth, despite being of the same social stratum.

Africans are known to spare little expense whenever one dies, to give what they believe to be a “befitting” send-off, but religion and culture determine how much.

Islam ensures a lean budget that covers white robes to wrap the deceased and planks of wood to ward off soil from the compartment the body is placed in the grave.

“Muslim burial protocols are standard no matter the stature of the person,” said Sheik Juma Amia, the Jamia mosque Imam in Nairobi, during a TV interview.

The departed is buried as soon as possible after being washed, wrapped in several white sheets before holding congregational prayer service called the Janazah, during which mourners intercede for the soul of the departed.

READ ALSO  Kambua: Losing my second baby hurt more than the death of my parent

“We use three pieces of white clothing for a man and five for a woman.

“The mosque takes over burial costs for those who are underprivileged. We can’t wait for them to raise funds because the departed have to be buried the same day, lest the body starts to go bad,” he explained.

Like most cultures, grave digging is done by volunteers and the body interred without a coffin. Unlike other cultures who spend a fortune to transport the dead to their ancestral homes for burial, Muslims bury the departed at the place of death to allow for the family to meet the 24-hour disposal rule.

This philosophy is affordable and a sharp contrast with the Africa culture where the cost of living is expensive, but dying is even costlier.

The Cost of Dying Report by Life Insurance provider Sun Life shows that Kenyans spend more than 20 per cent of their annual income to send off their loved ones in lavish funeral rituals, placing it among the top countries in the world with expensive funeral budgets relative to their average incomes.

“Much of the funeral costs depend on the cultures, traditions and religion,” states the 2020 report.

An earlier study commissioned by the Association of Kenya Insurance and conducted by Ipsos Synovate found “normal funeral budgets” of Sh50,000 to Sh300,000 for the average middle-class home. The expenses escalate to between Sh400, 000 and Sh2.5 million, especially in cases where the deceased was hospitalised for some time.

The study says that for Muslims the cost is estimated at Sh10, 000.

The market-understanding study, which was carried out in Nairobi, Mombasa, Kisumu, Nyeri, Kajiado and Eldoret, was meant to shed light on the funeral customs and practices conducted in Kenya as well as gauge barrier to uptake of funeral insurances.

It found a slow shift in how funeral expenses are catered for.

For that reason, funeral costs and expenses are becoming difficult to manage especially in cases when the breadwinner dies. The family is burdened with costs to bury their loved ones, it states.

However, welfare associations like Saccos, church groups and table banking groups (chamas), have come in handy in bailing out bereaved families.

Another reason for the high costs of dying is that families tend to hold on to the departed for about a week, allowing the posh funeral homes to rake in millions.

Sometimes it is unavoidable, especially when there are pending hospital bills, or court cases. But it’s mostly out of choice, for the family to slowly come to terms with their loss and plan for the burial.

Besides paying for body preservation, they would hold daily meetings at the ancestral homes, and sometimes in the town he worked in, spending money on food and fuel while raising more money for the burial ceremony.

In the modern days, burials seem to be more exciting and with higher stakes with politicians and friends from wide taking part, while fewer heed the calls for medical aid which are often frowned upon.

Observant Kenyans would note for instance that WhatsApp groups meant to raise funds for an ailing person record enough participants exiting, unlike the funeral groups where there’s a conviction to contribute one last time for a person who will never to be seen walking the earth again.

The cost of burials in Kenya often depends on the deceased’s stature in the society, but some tend to overspend for show and end up poor in the aftermath.

According to a report in the Journal of Human Development, 63 per cent of poor families in Kenya attribute their lack to heavy funeral-related expenses (including slaughter of family livestock).

Poor health and health-related expenses was the most mentioned contributor of poverty by 73 per cent of Kenyan families in the 2013 report. Others were large family sizes and small landholdings or subdivision.

While the African customs are slowly borrowing from the lean budget, Muslim and Hindu cultures of cremating the dead to cut the costs of funerals, it’s a feared idea, thanks to the beliefs that unless the dead are given a “proper” send-off, they would return to haunt the people.

In most cases, death is often looked at from both religious and cultural perspectives in Africa, according to Rabi Ekore and Lanre-Abass Balatiti’s book: “African Cultural Concept of Death and the Idea of Advance Care Directives”.

“Religion is said to help provide meaning and answers to the problems of uncertainty, powerlessness, and scarcity that death creates. Funeral rituals have thus evolved to acknowledge this, incorporating religious value in the rituals and enabling bereaved persons to find meaning for an event that for most people is inexplicable,” states the book.

“Furthermore, it is an African cultural belief that to be in the world of the dead confers supernatural powers over those in the world of the living, such as the ability to bless or to curse, and to give life or to take life among others. Unless you give a loved on a befitting send-off, they will return to haunt you,” it reads in part.

Dying is treated as the beginning of the link between the visible and invisible world.

Worsening the financial situations during mourning is that Africans do not like preparing for death in advance, for instance saving for their funeral, because contemplating of death is a taboo and breeds bad lack. The Western world on the other hand take it as a norm to save for their funeral to save their kin from carrying their burden.

With this expensive culture, families continue to suffer as death zaps life out of individuals and places the relatives on financial choke-hold.

However, the Covid-19 pandemic somehow changed the norms with health protocols demanding fewer guests at the burial events and sometimes food not being served to prevent the spread of the virus.

“The pandemic has changed the funeral industry dramatically, perhaps permanently. Most notably, direct cremations (where family do not attend the cremation, but can arrange their own, separate service) are becoming ever more popular,” SunLife noted in its 2021 report.

“This increase in direct cremations can’t be solely because of the pandemic. But the lower cost, and the fact that many people couldn’t organise a more traditional funeral due to government regulations, are likely to have been significant factors,” the report states.

Related Topics:Garissa Senator Haji
Up Next