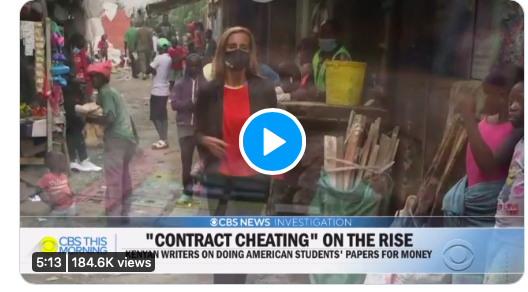 A section of American students are reported to hire their Kenyan colleagues to sit their exams and assignments.

An investigation piece by CBS Television exposed this vice, with reporter Debra Patta explaining how youth in Kenya are earning billions of dollars from academic writing.

The venture has been termed ‘contract cheating’.

The pandemic has seen an explosion in online education — but also cheating.

A @CBSNews investigation found an industry in Kenya that thrives on American students who pay to cheat for college-level assignments. @Debora_Patta spoke to some of those Kenyan writers. pic.twitter.com/YPO5KvGfv1

The exposé was necessitated by numerous complaints lobbied by US universities, as well as the authorities.

They termed the practice as cheating, as most students graduate with the excellent grades that term them as professionals, despite lacking the skills and knowledge they are meant to obtain from their respective institutions.

According to the reporter, Kenyan writers are given login details to various student portals which give them access to the amenities like the Campus library, where they can study for the exams before sitting for the exams on their behalf.

The American students pay between Sh2,000 to Sh5,000 per page. However, the experienced writers look for upcoming writers to give them 25 percent, meaning they take home between Ksh500 and Ksh1,200 per page. One page can be about 275 words.

In the exposé, one Kenyan confessed to having done the exams and other academic work for students in the US.

He revealed that he did an undergraduate degree as well as a master’s degree for one student.

“I did his degree and right now I’m doing his master’s degree…he has also promised me that I am going to do his Ph.D.,” the writer said.

According to the youth, he makes Sh200k, every month.

Kenyans are so good with their work, that the students in America show concern that the performance is too excellent.