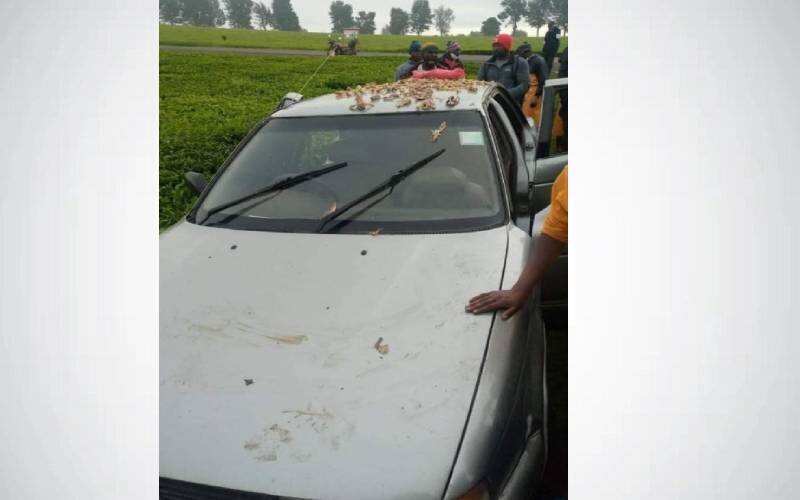 The law enforcement officers told The Standard the suspect had on Wednesday morning, May 12, offered a lift to the school-bound teenager and another girl, a primary school pupil. Both learners were heading to Limuru Town from Kabuko .

The suspect first dropped the younger learner near St. Paul’s University and proceeded towards Limuru Town with the elder student in his car.

However, the suspect detoured to tea plantations adjacent to Nazareth Hospital, and allegedly defiled the minor in his vehicle.

According to the alleged victim, who recorded a statement with police, the suspect threatened to kill her by injecting a poisonous substance into her body if she dared raise the alarm.

After the suspect was allegedly done with the act, he started driving back towards Limuru.

While en route Limuru, the alleged victim, who was seated on the passenger seat, spotted tea pickers working in the plantations.

The girl gathered courage and grabbed the steering wheel, prompting the moving vehicle to careen into a roadside ditch.

The teenager, thereafter, switched off the vehicle, grabbed the car key, opened the passenger door and bolted out of the car while screaming for help.

Tea pickers rushed towards the girl while inquiring what the problem was.

The teenager narrated her ordeal, prompting her rescuers to confront the suspect, whom they pulled out of the car. They, thereafter, assaulted the suspect in turns, leaving him stained with blood.

Police officers from Tigoni Station, however, arrived at the scene and rescued the suspect from the irate mob.

The teenager was rushed to Limuru Health Centre for medical attention.

Area police boss, Eileen Mola, told The Standard the suspect, who suffered head and facial injuries, was taken to a Limuru hospital for emergency care.

The tricenarian was, thereafter, arraigned at the Limuru Law Courts, where he requested to be allowed to receive comprehensive treatment before he takes plea. He said the facility he was taken to for emergency attention recommended he undergoes a computed tomography (CT) scan.

A CT scan uses computers and rotating X-ray machines to create cross-sectional images of the body. These images provide more detailed information than normal X-ray images. They can show the soft tissues, blood vessels, and bones in various parts of the body.

A doctor’s report on whether the suspect’s alleged victim was sexually assaulted is yet to be out.

Police boss Mola said besides defilement, the suspect will also be charged with being in possession of fake currency.

“I urge parents to discourage their children, especially girls, against accepting lift offers from strangers,” said Mola, adding: “Some of these people (who offer lifts) are up to no good.”

Mola further warned: “Sexual offenders in most cases kill their victims to get rid of the evidence.”

The suspect is expected to answer defilement charges on May 17.

After his treatment, he will be remanded at the Tigoni Police Station, Limuru Chief Magistrate Everlyne Olwande ordered.