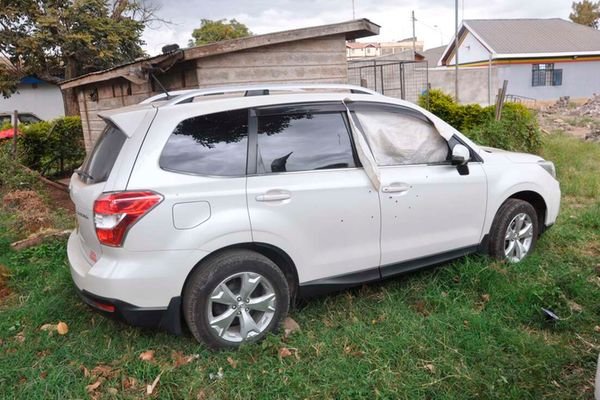 Heavy traffic on Thika Road and a vehicular mishap at Kamakis near Ruiru town, Kiambu County, might have saved Susan Wangari’s life on Tuesday afternoon.

Ms Wangari took a matatu in Nairobi’s CBD hoping to catch up with her husband, Daniel Gucoma, 36, who was waiting for her at the intersection of Thika superhighway and the Eastern-Northern bypass at Kamakis near Ruiru, Kiambu County.

The mother of three had received a call at 2.29pm from her husband, who was asking her to carry some documents that he intended to use to close a car deal in Thika.

She was to pass on the documents to her husband, who would then drop her at their Juja home before proceeding to Thika town, where he was to close a car deal.

However, there was heavy traffic on the superhighway and the matatu took too long to get to Ruiru. Fearing that he might miss out on the car deal, Ms Wangari’s husband decided not to wait for her.

Besides the traffic snarl-up, barely a kilometre from where her husband had been waiting for her, the matatu Ms Wangari was travelling in developed mechanical problems and she and the other passengers had to be ‘sold’ to another matatu.

As fate would have it, the matatu broke down at the exact same spot where her husband had been waiting for her.

Her husband’s last call had come at 2.56 pm. An edge of impatience to his voice, he had asked her to send the documents he had been waiting for on WhatsApp messenger, as he was getting late for business.

READ ALSO  Museveni's son Muhoozi to President Ruto: "If I made a mistake, forgive me."

It was the last call she would receive from her husband.

“He felt he could not wait for me any longer as he was getting late for the business in Thika. We agreed that I should share details of the vehicle he wanted to sell and the Tim account details via WhatsApp,” a shocked Ms Wangari told the Daily Nation.

Then the shattering news came.

“As we were being transferred to another public service vehicle a few minutes past 3pm, I got a call from my friend, informing me that my husband had been involved in an accident at Gwa-Kairu area near Spur Mall. I boarded another vehicle to the scene, only to find he had been moved to Thika Level Five Hospital, where he was pronounced dead on arrival,” she recalls.

The body was later moved to General Kago Funeral Home while the car was towed to Juja Police Station.

The Daily Nation learnt that the killers, who were riding on a motorcycle, had a getaway car that had been trailing the killers and their target, waiting for the assassination to be done with to ferry the killers out of the scene.

The three killers sprayed the car with bullets, killing Ms Wangari’s husband before escaping in their waiting car. They had pumped 24 bullets into their target, leaving him slumped on the dashboard.

Police suspect the killers abandoned the motorbike they used in the drive-by shooting.

The windscreen, which had nine bullet holes, was completely shattered on the driver’s side. There were three bullet holes on either side of the back seat.

Splodges of human brain and blood were splattered all over the dashboard and on the front seats, from where a fetid stench wafted through the shattered windows.

Juja Directorate of Criminal Investigations Officer Richard Mwaura told the Nation he was not in a position to comment about the incident as the matter is complex and investigations had already begun.

“For now I cannot comment about the incident because the matter is complex and is under investigations,” he told Nation.

In an interview with the Daily Nation yesterday (Wednesday), Ms Wangari said her husband, who used to buy and sell vehicles, had not expressed any fear for his life.

“My husband was a car dealer. He would buy and resell vehicles at a profit. The Subaru Forester he was driving when he met his death was purchased less than three months ago through a loan that we are currently servicing,” she said.

A post-mortem examination will be done tomorrow at General Kago Funeral Home.