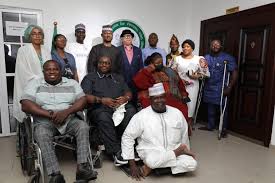 The national council for Persons with Disabilities (NCPWD)has today paid tribute to Kenya’s 3rd head of state Mwai Kibaki at the Parliament.

With the death of former President Mwai Kibaki, many of his great works are being remembered.

A part of his legacy that is yet to be covered is disability issues in Kenya.

According to the NCPWD Boss Peter Muchiri, President Kibaki assented to the very first law on disability issues in Kenya’s history – The Persons with Disabilities Act 2003 on 31 December 2003, barely months after taking office.

“In an interesting coincidence, this was a few months after his experience using a wheelchair following the road accident in Machakos. This law provides rights and services entitled to persons with disabilities – rights they enjoy to this day almost two decades on,” he lamented.

He said under his watch, that Kenya also ushered in a new constitution in 2010, which further dictates and strongly protects the rights of persons with disabilities.

“To persons with disabilities, Mzee Kibaki is the Lincoln of their generation. He is a man every person aspiring for any political seat in the August elections must emulate,” he further noted.