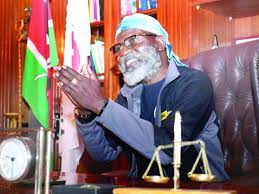 Philosopher Dr. Odhiambo Swa Makaduol the Coordinator of the Luo community Development Society Worldwide Union has narrated the story of how the Roots Party leader George Wajackoyah fled the country after the assassination of Dr. Robert Ouko.

On the morning of February 12, 1990, Dr. Ouko told his wife Christabel to travel to Nairobi by road and that he would join her by air the next day.

In the evening of that day, Dr. Ouko entertained the company of sister Dorothy Randiak who had to check on the Minister.

After Dorothy had left, the Minister checked on his poultry. That day, he had received a brood of 500 chicks.

Dr. Ouko was with his home servants, Selina Were, the housemaid; Zablon Agalo, the AP officer guarding the home; and Philip Rodi, the farm manager.

He was called by his boss who instructed him to drive the PC’s white Mercedes to Sirikwa Hotel in Eldoret to pick up some guests at the Hotel.

At Sirikwa Hotel, 3 people approached him and identified themselves as the people that he had been sent to pick.

They left Eldoret at 8.00 P.M. and drove to the PC’s residence where he found a fleet of top government officials.

At the PC’s residence, he saw Mr. Hezekiah Oyugi, Mr. Jonah Anguka, and Nicholas Biwott. There were five cars at the residence.

At around half past midnight, he (Michael Owiti ) was instructed to lead the party driving along Kisumu – Kericho Road. In his vehicle, he carried the PC and two of the guests he had picked up at Sirikwa Hotel. They turned at a junction towards Muhoroni

READ ALSO  Prof Moni Wekesa: How altercation in Finland made me study law

At a certain point, they were instructed to put off their lights and wait for a signal for them to proceed. Near the home of Dr. Ouko, all passengers alighted leaving the drivers alone, and walked towards Dr.Ouko’s home.

At around 2:00 AM, Selina Were, the housemaid, was awakened by a loud bang.

At first, she did not come out due to fear and because there was an armed guard in the compound.

She curiously and with fear peeped through her window, she saw Philip Rodi (farm manager) tiptoeing followed by men who were in green uniforms moving towards the store.

After a while, she saw Hezekiah Oyugi standing in front of her door. The security lights were on then.

There was no single vehicle on the homestead. After an hour or so, she came out of her house and went to the open visitors shed where she saw a white Mercedes Benz with dim lights turn at the lower main gate.

In the morning, Selina went to the bedroom and saw Dr. Ouko’s pajamas on the bed and the window fastener broken. The spectacles of the Minister were on the table in the sitting room.

The Administration Police Constable tasked with guarding the Minister’s home, Zablon Agalo, claimed that on that night, he did not see anything, since he was guarding the cattle boma.

In his statement, he said that at 2:30 AM that night, he saw Mr. Oyugi standing near Selina Were’s house, and Mr. Jonah Anguka was with him. Anguka who wore a blue suit with a tie was moving towards the cattle boma gate. He greeted him but Mr. Oyugi gestured for him to keep quiet.

A short, stocky, black man was standing at the verandah of Dr. Ouko’s house hiding behind a pillar. Rodi confirmed later that the man who stood behind the pillar at the verandah was Nicholas Biwott in the statement he recorded to the Sunguh Committee.

READ ALSO  New US ambassador to Kenya is extraordinary

He also saw the white car that Selina had referred to and heard the loud bangs and gunshots. ( These shots were fired by Dr. Ouko at his abductors. Unfortunately, they cornered him and pinned him down before he could shoot any of them )

Michael Owiti, the civilian driver to PC Kobia confirmed the Minister was grabbed from his house by 3 guests he had picked in Eldoret. Once he was captured, they forced a gag into his mouth, tied his feet, handcuffed his hands behind his back, and dragged him to the vehicle.

Two of the guests and PC Julius Kobia entered the vehicle and instructed him to drive to State House Nakuru, a distance of 180 kilometers. At Kericho, the convoy stopped briefly to refuel. All this while, Dr. Ouko was struggling and groaning in the boot.

At State House Nakuru, they found gates open and all the 5 vehicles whizzed inside. All the passengers in the vehicles alighted and Dr. Ouko, who was now nose bleeding, was literally lifted from the vehicle into State House. They were in Nakuru until around 3.00 P.M of 13 Feb.

According to the Inspector, Dr. Ouko was carried into the state house, he begged for his life as his captors beat him up and slammed him against the walls. One of the men who had been hired broke a leg from a seat and used it to crash Ouko’s legs.

All the while, the Dr. was lying painfully on the floor begging and pleading. To finish it off, Biwott took a gun and shot him in the head.

Mr. Wajackoya, who was working in the ‘music room’ (phone tapping room), happened to have tapped and recorded a phone conversation between Daniel Moi and Nicholas Biwott on that day Ouko was killed.

In the conversation, Biwott confirmed to Moi that the problem of Ouko had been taken care of for good, and Daniel Moi thanked him (Biwott) for it.

Mr. Wajackoya handed over the tapes to the British Intelligence people in exchange for asylum.

On 13th February 1990, Dr. Ouko was scheduled to fly to the Gambia. His secretary and bodyguard were waiting for him in Nairobi.

In the afternoon he had not shown up. People at the ministry and home started to raise eyebrows.

His wife Christabel Ouko, who by that time was at Loresho, called Selina Were.

Unbeknownst to Christabel, at that very moment, she was calling home to enquire on the whereabouts of her husband, a Kenya Police helicopter was hovering over Got Alila Hills, just 6 kilometers from the Minister’s Koru home, carrying the lifeless body of the Minister.

It took less than 10 minutes to drop the body and arrange the few items, some of which had been gotten from the Minister’s home, with the help of Philip Rodi, the farm manager.

I won’t participate in the presidential debate with Mwaure: Wajackoyah