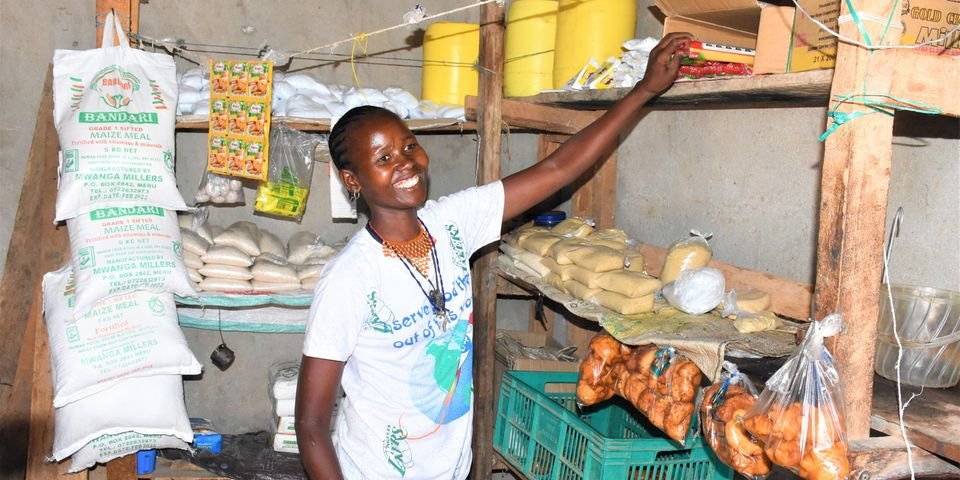 Veronica Lomatukae, from Lowangila village in Isiolo County, is a contented woman.

She was once a charcoal maker in Ngaremara ward, but not anymore.

Ngaremara, inhabited by the Turkana community, is synonymous with charcoal making, with a majority of women solely relying on it as their main livelihood now that pastoralism has been undermined by prolonged droughts.

To evade arrest, the mother of two and others would cut down trees late in the evening and transport charcoal at night, a venture she says was not only risky but also unreliable and less rewarding.

“I sold a sack from as low as Sh200 after the strenuous activity but I had no alternative as my children needed food and other things,” she says.

Like a majority of residents in the region, her family struggled to access safe and nutritious diets due to high poverty levels, leaving her two children malnourished.

The leading causes of malnutrition in Isiolo include low uptake of supplements, high child morbidity, cultural beliefs and poor feeding practices due to food insecurity.

Ngaremara is among Isiolo North’s malnutrition hotspots, alongside Burat and Oldonyiro.

Fortunately, Ms Lomatukae in August this year benefited from the USaid-funded Nawiri’s Sh27 million cash transfer programme targeting 600 families in Cherab and Ngaremara with malnourished children so they can meet their basic needs.

The project targeted ultra-poor households across 14 villages that are far from health centres and whose children are at risk of repeat acute malnutrition.

Besides cushioning her family from the biting effects of drought, Ms Lomatukae says her children can now access nutritious food and health products to improve their health.

The families will receive Sh7,500 every two months for the next one year under the programme that seeks to reverse acute malnutrition rates.

But it is the Sh20,000 business grant for 200 groups of three households that made the mother abandon charcoal making.

“I regret being involved in environmental degradation and I have taken it upon myself to educate women on the need to shun charcoal making because it is the cause of the harsh climatic conditions we continue to experience,” Ms Lomatukae says.

Nation.Africa caught up with her at the diversion to Lowangila village, about 10km past Isiolo town towards Samburu.

She was busy serving a group of men with camel meat soup seated under an acacia tree outside her iron-sheet kiosk that also serves as a general shop.

“We sell camel meat, soup and cereals, among other items,” an elated Ms Lomatukae said while ushering us into the kiosk that she operates with Ms Marynadeta Loriu and another woman, who are members of the Nachami group.

“Our business is barely two months old and we make a profit of at least Sh1,500 daily,” Ms Loriu reveals, saying they had started saving part of the profits for future business expansion.

Having a reliable source of income, the women say, enables their families to get enough food for healthier living.

“I can now help my husband pay fees for our children and they can carry food and even come home to eat, improving their health,” Ms Lomatukae says, adding that they had been trained on health and nutrition.

About one kilometre away is Tractor town, where Mary Eyanae, another beneficiary who previously engaged in charcoal making, operates a general shop and an eatery with Ann Eluman and Lucia Ekwam, an engagement they say has transformed their lives.

The 38-year-old says her children used to sleep on an empty stomach but they now get enough food, thanks to the cash they get under the Nawiri programme and proceeds from their businesses.

“We are no longer worried about what the children will eat as we now have a source of income. The struggle we had walking under the scorching sun to fell trees for charcoal is gone,” said Ms Ekwam, a 26-year-old mother of two from Attan village.

The regular health and nutrition training by Nawiri is meant to ensure households improve their feeding practices, especially for pregnant women, infants, young children and people with disabilities.

In Isiolo and Marsabit, Nawiri aims to increase awareness on malnutrition so as to sustainably reduce persistent acute malnutrition and strengthen institutions.

Stakeholders have called for resources to be prioritised for health and nutrition so as to reduce the two counties’ overdependence on development partners in tackling malnutrition.