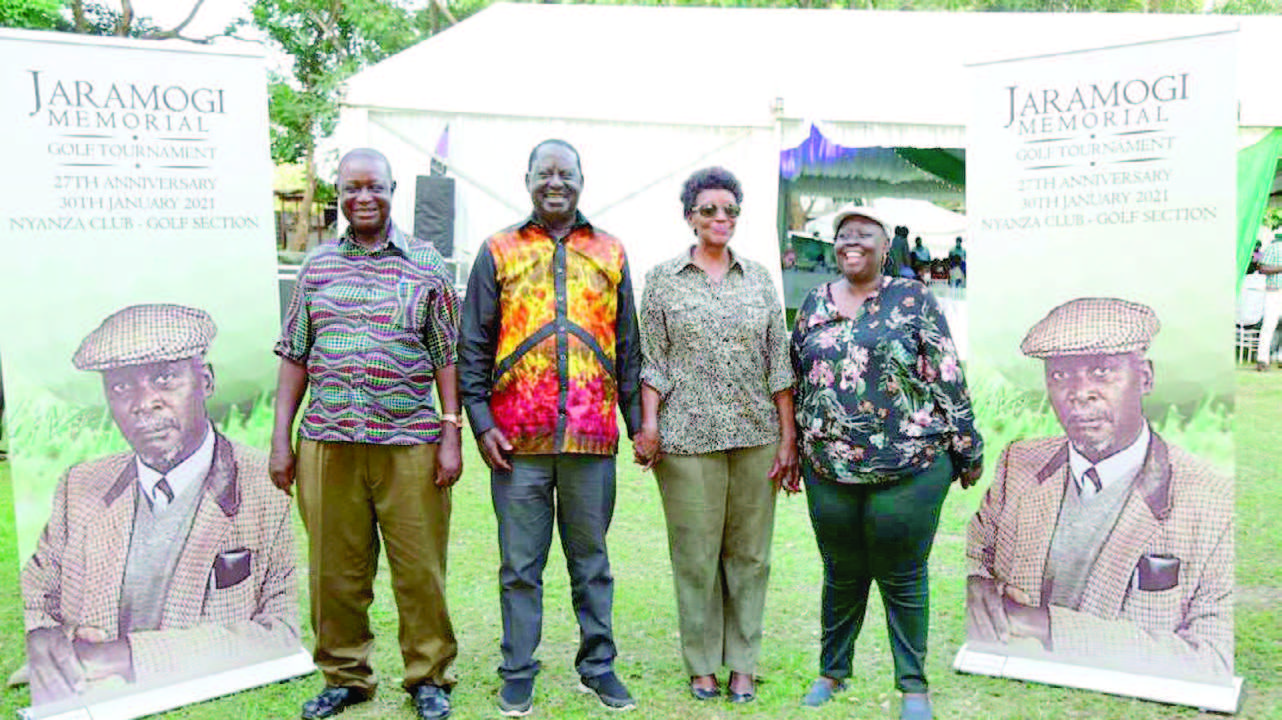 Within a span of five months, five members of the famous family including ODM leader Raila, brother Oburu and his son, and sister Ruth have had a close shave with Corona

The Odinga family is still reeling from the ravages of the Covid-19 pandemic, which has struck five family members in the last five months.

The latest to be affected by the disease is the family’s most famous son, Orange Democratic Movement (ODM) party leader Raila Odinga, who was last week taken

ill and admitted to the Nairobi Hospital for five days.

Raila’s sudden illness and hospitalisation sent shockwaves across the country, forcing him to come out and issue a public statement assuring his supporters that all was well.

In a candid interview with People Daily yesterday, Raila’s elder brother and the Odinga family spokesman Dr Oburu Oginga, opened up on how the pandemic had ravaged the family of the late doyen of opposition politics, with at least five members being hospitalised since last October after contracting the disease.

According to Oburu, an East African Legislative Assembly (Eala) MP, himself, his sister Ruth Odinga, his son and Raila have at one time or another over the last five months been hospitalised suffering from the disease.

One other family member, whom Oburu declined to name, is currently in isolation after contracting the virus.

Yesterday, Oburu revealed how the family’s resilience and trust in God had seen them overcome the deadly disease.

Oburu narrated how he had tested positive soon after the much-publicised meeting with elders from the Kikuyu community who had visited the Odingas at Kang’o Ka Jaramogi in Bondo, Siaya County, in October last year.

“We had a big delegation that came to our home to cement the relationship between the Kikuyu and the Luos. We had a good meeting and exactly a week after the elders left I felt sick and when I went to hospital I tested positive for Covid-19,” Oburu narrated.

He said even though he was calm, members of his family including Raila were shocked at the news.

“You know it is a strange disease and going by what had been in the news then, my family members were shocked but we had faith that we would overcome it,” he said.

By some twist of fate, Oburu was admitted to Nairobi Hospital and coincidentally, in the same ward where his younger brother Raila spent five days last week.

Oburu said: “I was very confident that I would overcome it because to me it is just like any other disease. In fact, many people die of other diseases everyday so it was just normal.”

He said his symptoms were not severe even though most of his family members were worried. In total, Oburu spent two weeks in the hospital.

“Mine was kind of asymptomatic but I had faith that I would overcome it and here I am and by the grace of God I feel strong,” he said. A couple of weeks later, one of his sons, whose name he declined to disclose, also tested positive for Covid-19.

“Immediately after my case, my youngest son also felt sick and when he went to hospital he tested positive and had to be isolated for some time. And luckily he also survived and is now back on his feet,” said the veteran politician.

Since he was discharged from hospital, Oburu said he ensures he does his regular exercises and minds his diet. Occasionally he plays golf at the Nyanza golf club to burn some calories.

READ ALSO  Police officer in a shooting spree kills wife, five others , then himself

“I play golf not to become a professional golfer but because it’s a good exercise opportunity for me; at my age I need to be physically fit,” he said.

Oburu’s younger sister Ruth, who served as the Kisumu deputy governor between 2013 and 2017, also exhibited Covid-19 symptoms and was admitted for three days at the Nairobi Hospital before being discharged.

Ruth said: “I was losing breath and had a severe headache. I was surprised, however, when my results turned negative and I even wondered how because all the symptoms were similar to those of Covid-19.”

“I was ready to go public because I had faith that I would overcome the disease. Since then, I have been praying because to me it was a miracle that I had the same symptoms but tested negative.”

People Daily established that another member of the Odinga family is currently in isolation after testing positive.

“It is true one of the members apart from Raila is also in isolation but because of the sensitivity of the matter, I cannot mention the name,” said the source who requested anonymity.

Oburu encouraged Kenyans who have tested positive for Covid-19 to go public about their experience as part of the fight against stigma around the disease.

“For me, I fear nothing, that is why I am confident of saying I had Covid-19. It’s just like any other disease but because it is a strange one, people fear talking about it,” the MP said.

He added that the family was “shocked to the core” by Raila’s revelation last week that he had contracted the disease.

“I was shocked because I was with him a day before and he was in high spirits and I even told him he looked bright. When the results came out it was a shocker to me and the entire family.”

READ ALSO  How Ommy Dimpoz got away with Sh3.1m hospital debt

Raila was discharged at the weekend after spending five days at the Nairobi Hospital. Prior to his admission, Raila had spent a gruelling week at the Coast to drum up support for the Building Bridges Initiative (BBI) and stem the clamour by some politicians from the area to form a regional political party.

His personal doctor David Olunya, said in a statement to newsrooms that the opposition leader was responding well to treatment.

At the weekend, the former Prime Minister posted a video in his social media pages doing exercises at home after being discharged and promised to follow his doctor’s guidelines.

Raila said; “It’s so nice to be back home even though I am still in isolation.” Raila’s wife Ida, said the family got scared after the ODM leader fell ill and got admitted to hospital.

According to Ida, his discharge on Sunday was a big sigh of relief for the family and has also brought calmness to the family.

“We panicked a bit, but we thank God Baba is in a good mood and good health,” she told a local newspaper.

Oburu said the family had decided that Raila takes a break as advised by his doctors before he engages in any other activities.

“I want to tell Kenyans that Raila will be back in action to continue with his activities and political campaigns for the BBI but for now he is still following the guidelines of the medics,” he said.

709 The number of patients currently admitted in various hospitals across the country. Another, 2,223 patients are on the home-based care programme.