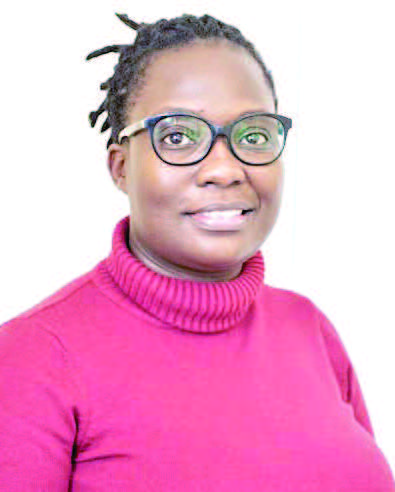 Learning and wanting to communicate is something that occurs naturally in all children. And Gabriella Gathoni’s failure to achieve this when celebrating her second birthday got her parents worried.

Though they thought it was not a major problem, but just a delayed milestone, Gathoni’s parents Esther Wanjiru and Geoffrey Amakanji decided to seek professional advice at Gertrude’s Hospital in April. 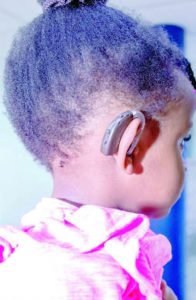 The hearing aid in Gabriella Gathoni’s ear. It makes some sounds louder so that a person with hearing loss can listen and communicate.
COURTESY

Older children keep saying ‘huh’ when they are being talked to and trying to lean their heads to get their ears close to the speaker. When watching TV, they will put a higher volume. It is important that parents are keen and take their children for hearing loss screening as soon as possible.

“The good news is that there are various ways to diagnose hearing loss and also help those that are found to be hard of hearing. There are tests such as Otoacoustic Emissions [OAE) Brainstem Auditory Evoked Responses [BERA) and Pure Tone Audiometry [PTA),” Kemunto adds.

OAE is a test used to find out how well your inner ear, or cochlea, work; BERA measures how your brain processes the sounds you hear and PTA is a behavioral test used to measure hearing sensitivity.

Children found to be hard of hearing are treated according to their degree of loss. Options include surgery for CI, hearing aids programmed according to the hearing loss and sign language and lip-reading to add on to more ways to communicate.

And how can we prevent hearing loss in children? Kemunto says all pregnant women need to attend prenatal care so that the health of the baby is guaranteed. Proper and timely immunisation of the children to avoid infections that may lead to hearing loss is of great importance also. Parents should also not expose their children to loud noise via headphones or earphones.

Parents should also avoid medication with over-the-counter antibiotics because some are harmful to the ear if not prescribed by the doctor for the correct dose and for purpose. Care should also be taken not put objects in the ears.

“Use of the cotton buds to clean the ears should also be discouraged for it may lead to accumulation of wax in the ear or may lead to perforation of the eardrum or bruising and the skin in the ear canal leading to infection, which eventually leads to hearing loss,” she adds.

“The good news is that there are various ways to diagnose hearing loss and also help those that are found to be hard of hearing.