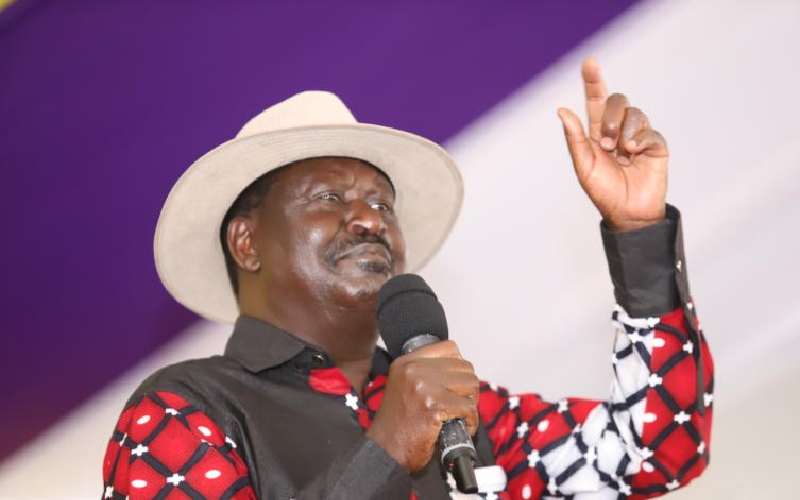 ODM plans to team up with other parties to form a formidable force to face off with Deputy President William Ruto in next year’s General Election.

Speaking in Homa Bay and Nyamira counties yesterday, ODM leader Raila Odinga announced plans for a series of meetings across the country starting Friday to chart the way forward. Raila, who spoke at Kawahindi village in Kasipul Constituency during the burial of Russel Oranga, brother in-law of his sister Wenwa Akinyi, further dismissed claims that he was too old to lead the country.

“Some people say Raila is already old and can easily be wrestled down in a battle. Am I old?” posed Raila.

The ODM leader said he has a ‘lot’ of energy to marshal votes across the country.

He vowed to increase his support base in Mt. Kenya region, where he got few votes in the 2017 elections.

“It is unfortunate that some people are saying Raila is too old to climb Mt Kenya in the quest for votes. What they don’t know is that I have a lot of energy and with strong donkeys (foot soldiers) for climbing the mountain,” said Raila.

He promised to transform the country to be like Asian tigers Singapore, South Korea and Malaysia.

National Assembly Minority Whip Junet Mohamed said following the withdrawal of ODM from NASA, it will team up with Jubilee and other like-minded parties ahead of 2022 polls.

READ ALSO  Ruto to Raila: We are smarter than you
Related Topics:
Up Next