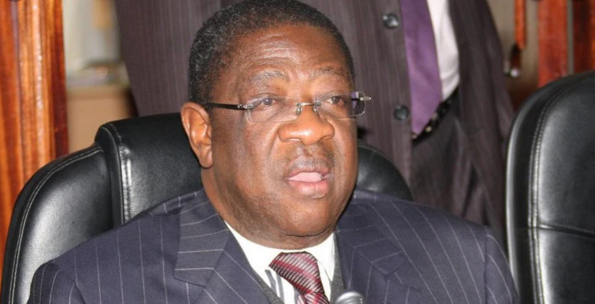 The 18th National Prayer Breakfast played host to several narrations on a wide range of issues in the country including on hard times occasioned by the Covid-19 pandemic.

Busia Senator Amos Wako’s confession to his battle with the deadly Covid-19 pandemic was one of a kind.

The Senator, who spoke after the health CAS Mercy Mwangangi had given an update on the state of the pandemic in the country, says he has been humbled by the Covid-19 experience.

In February, Senator Wako narrates that he tested Covid-19 positive after days of ignoring symptoms associated with the virus.

Wako recounts that at one time, he reprimanded his cook for not preparing the food properly yet he had lost appetite, one of the Covid-19 symptom.

In another instance, during the burial of former Wajir Senator the Late Yusuf Haji, Wako says he became completely disoriented that he could not recognize the former Prime Minister Raila Odinga.

“During the funeral of my colleague Senator Yusuf Haji, as I was seated, my party leader Raila Odinga came to where I was and I asked him who he was,” he narrated

“And he posed back, who are you? tell me first. It is when he removed his cap, mask and began laughing that we all laughed,” he continued.

The Senator says it is on that day that it appeared to him that something was wrong that he was forced to seek medication by his son.

At that stage, Covid-19 had not crossed his mind yet since he says he is a strickler of Covid-19 rules and regulations.

Upon arrival to hospital, the Senator narrates that he was tested and confirmed positive.

Within a twinkle of an eye, the Senator says he was put in the ambulance and under oxygen as he was transported for extensive medication.

That was the first time ever in his life to board an ambulance.

During his journey to the hospital when thoughts of losing his life hanged on his mind.

“I recalled news items to the effect that some of those who were transported by ambulance for medication were dead on arrival. I wondered whether I will arrive alive,” he narrated

“I remembered people dressed in white, those who were burying people who have succumbed to Covid-19. At that time is when I asked myself, am I the next?” he posed.

It is during that season of treatment that he realized death comes when least expected, he says.

He adds that one should be ready and prepare for his death since that time will definitely come.

“These considerable delays in being tested or knowing my status contributed to the seriousness of my case which doctors say was touch and go affair,” he said.

The National Prayer Breakfast was attended by President Uhuru Kenyatta and his deputy William Ruto.

READ ALSO  Former Kenyan ambassador to the US is dead

The sting of divorce: Man to keep wedding ring after court throws out wife’s case