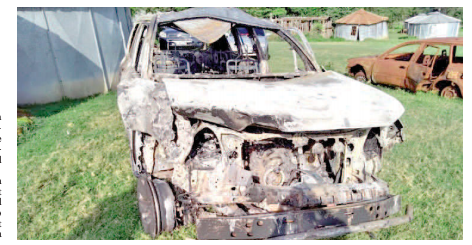 Unfortunately two lives were lost,” he said in an interview with People Daily. “It by God’s grace that we are alive today.” Maangi said he had stopped to assess the damage caused by the accident when a crowd started milling around the scene, mainly comprising boda boda riders and workers from a nearby quarry. “Some started baying for our blood, shouting tuwachome! tuwachome! (Let us lynch them), luckily a motorist who was driving towards Narok town slowed down and beckoned us to jump into his vehicle before he sped off. We left our vehicle with the engine still running,” Maangi narrated. “We are all safe. My sincere condolences to the family that has lost their loved ones, let us put them in our prayers.”

The deputy governor said he was driving to Nairobi to attend a scheduled breakfast show on a local TV station when the accident occurred. Police in Narok South sub-county yesterday started investigations into the accident while warning the public against taking the law unto their hands.

Deputy governor was headed for Nairobi when he got involved in accident with a motorbike Addressing the press, area deputy police commander Ms Magdalene Chebet said Maangi’s vehicle was travelling from Kisii to Nairobi when it hit a middle-aged man and his eight-year-old child who were riding on a motorbike at Olulunga area on the Bomet-Narok highway.

Chebet said the motorbike was joining the main road when the vehicle hit it on the right side, killing the two on the spot. Furious crowd She said after the accident, the deputy governor stopped to assess the impact of the accident. However, a furious crowd consisting of men working at a nearby quarry and boda boda operators had already started flocking the scene and started threatening the deputy governor. It is then that the politician in the company of his bodyguard and driver jumped into another vehicle and escaped towards Narok town, leaving the car engine running. Irate mob started stoning the car and later set it on fire, destroying it completely.

“It is very unfortunate that we lost the two people on the spot,” said Chebet. She said she had spoken to the governor’s bodyguard on the phone and confirmed the three escaped unhurt. “We expect the driver to come to our offices to record a statement that will facilitate investigations,” she reiterated. The police boss, however, warned residents against taking the law unto their hands, instead asking them to report to the authorities when they encounter such incidents.

She also cautioned drivers plying the Narok-Bomet highway to be vigilant owing to the big number of boda boda riders on the route.

The wreckage of the vehicle was moved to Narok South police station and the bodies to Narok County Referral Hospital mortuary.

The incident happened two days after Maangi was arrested and locked up overnight at Oyugis police station for allegedly planning to cause chaos during the burial of former powerful Cabinet minister Simeon Nyachae during a funeral service at the Gusii stadium on Monday.

Maangi, who was arrested alongside South Mugirango MP Sylvanus Osoro, was released without any charges being preferred against him.

Two weeks ago, Maangi was again caught up in an incident in which Osoro and Dagoretti North MP Simba Arati exchanged blows during the burial of his (Maangi’s) father in Kisii county