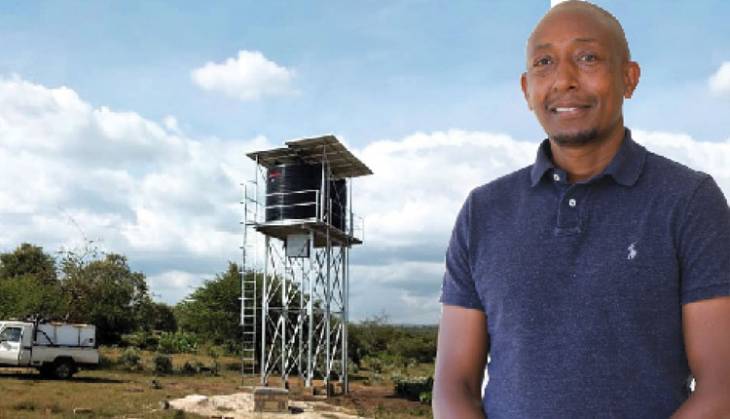 The need to give back to the community saw engineer Waiganjo Kamau leave a lucrative job in America to set up a company here in the country.

When Engineer Waiganjo Kamau left the country for Canada in the 90s, political instability was the order of the day.

The instability had affected the economy thus increasing uncertainty about future economic situations and policies.

Because of that situation, when he got an opportunity to study overseas he couldn’t resist.

After school, he immediately secured a job in the US with one of the biggest automotive companies in the world.

However, despite the well-paying job, Waiganjo was not comfortable utilising his skills in a foreign country.

He always wanted to come back home. However, the unstable economy made him establish his life abroad.

“I always wanted to come back home because I felt there was hope for the country after that regime.

I was always looking for an opportunity and when the opportunity came knocking in 2008, I couldn’t resist,” he starts.

Though he started preparing for his comeback in 2002, the dream became a reality in 2008.

He had to be sure all was going to be well after relocation, and since he had a family, he needed to prepare well before the move.

While still there he registered his company, Premier Water Solutions in 2008, with the main business idea being offering borehole drilling services as well as supply of water purification systems.

Towards the end of his stay in the US, he liquidated his pension to buy his first drilling rig.

Once set, he left his family and relocated to Kenya.

“I decided to venture into this business because I saw a huge opportunity in the sector.

Available research shows that Kenya has one of the lowest per capita available freshwater yet so little was done. I wanted to use my engineering skills to solve this problem,” he explains.

The idea he thought would be easy to sell because there was, and still is, so much more that can be done to increase the availability of fresh water, took him around one year before he could get a good client.

However, he never gave up, and instead, he continued to invest more resources in the company.

Because of the limited resource he also looked for a business partner and he secured a loan to purchase the second drilling rig.

“It was not an easy transition for me. Lack of resources for the first year since no financial institution trusted me made me move from Sh1,000 to Sh100 breakfast.

I would also use Sh200 to fuel my car something that had never happened before.”

In 2009, his company went ahead with top speed and has not looked back since.

Some of their clients include World Vision, ADRA, China Road and Bridge, and Athi Water Services Board.

And since not every Kenyan could afford to drill a borehole in their place, in 2010, he expanded to supply of clean drinking water under the brand Premier Water.

“My company revolutionised how the water refilling business was being done.

We were the first company to have their borehole and bottling plant in the supermarket vicinity. This made our water more affordable,” he adds.

Today, this highly reputable borehole drilling company prides itself in not only being one of a few highly professional water firms in Sub-Saharan Africa but also in the creation of additional employment and skill mastering opportunities.

“We are a full-service contractor on matters borehole drilling. We usually offer all-inclusive services such as borehole drilling, pumps and controls, tanks and towers, solar pumping systems, and water purification solutions.

We use state-of-art technologies to ensure that we provide exceptional professional services and the highest quality of clean affordable drinking water.”

And how is the uptake for their services? He says that the uptake has been good since the demand for borehole drilling services is there, especially from farmers.

The reason being farmers are now moving away from rain-fed to irrigation farming.

And to ensure that his services contribute less carbon emission, he has embraced the use of solar power in most of their projects.

Comparing when starting and now, Kamau says that today water levels are going down and they are forced to go deeper when drilling.

For example, in Karen where they used to drill to a depth of 200 -250 metres to get water, they are now forced to go deeper to between 350- 400 metres something he says is not a good indication urging the government as well as Kenyans to consider increasing the forest cover.

His advice to other entrepreneurs who would like to venture into this sector is that since this is high risk and capital intensive business, always do your risk assessment quite well, have the right personnel and sufficient capital, and since rigs need continual maintenance, find a good mechanic and have a budget item for repairs and routine maintenance.

Related Topics:NewsWaiganjo Kamau
Up Next

Why woman sought police protection after death of her friend