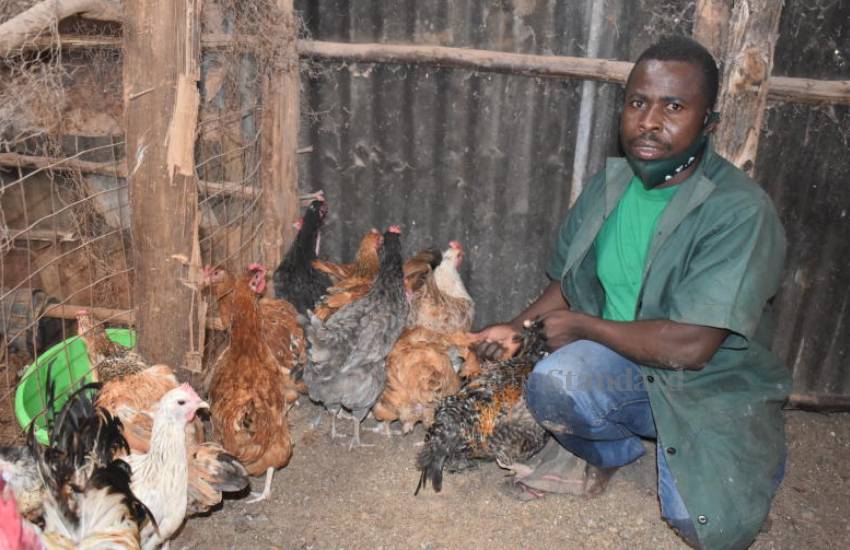 After graduating with a degree in Public Health from Moi University in 2014, Jacktone Ambole, went to the US to advance his studies after securing a scholarship.

After completing his studies, he got a plum NGO job in the US, worked for some time then came back to Kenya to ‘settle’. While exploring his options he decided to run for Mwibona Ward Rep seat in the 2017 polls but lost.

“My prime goal when coming back was to venture into farming full-time, but when an opportunity in politics presented itself, being a risk-taker, I decided to try my luck,” he shares.

“I had used up almost 90 per cent of my savings that I had accumulated from the Diaspora for campaigns. That was a big blow. I was in a tight fix,” recalls Ambole.

When he was still reflecting on what next, in 2018 he met Peter Ndeche, a poultry farmer from Siaya County, who was training farmers on rearing poultry for commercial purposes.

From the training, he dived into poultry farming at full throttle. He used the Sh20,000 that he had saved for a rainy day to buy the chicks, feeds and set up the structures.

“I bought 50 two-week-old improved Kienyeji chicks at Sh120 each. After three months, through my networks, I learnt about a wedding in the village and got the tender to supply 100 birds for the ceremony. I sold my 50 birds at Sh450 each and got Sh22,500. I sourced for another 50 birds from a friend at Sh350 and sold them at Sh450 each making a profit of Sh5,000,” recalls Ambole.

Though he was making small profits, they were steady and consistent.

Ambole injected the money back into the business and expanded his poultry house and bought 500 day-old chicks at Sh100 each. He also bought more feeds.

Since he was a beginner and wanted to make quick money, he used to rear the birds to maturity then sell them.

“I used to sell my chicken when they had attained the age of between two and four months. Those that were two months were going for Sh300, two and half months at Sh350, three months at Sh450 and four months at Sh700. My main market was the locals and events like weddings, funerals and birthday parties,” says Ambole.

By the end of 2018, the poultry farmer had saved enough money to procure an incubator with a hatching capacity of 528 eggs and a generator for backup power in case of blackouts.

To boost his income streams, instead of rearing the birds just for meat, he also started keeping them for eggs.

With that new strategic plan, Ambole says he bought 500 day-old chicks for meat and another 500 chicks which he kept for eggs.

Having learnt from the training the importance of sticking to a vaccine regimen, he follows it to the letter.

For the first seven days, he feeds the chicks on starter mash and changes to chick mash then to growers’ mash when they were two months until when they started laying eggs and changed to layers mash.

Knowing the power of networking, he has been aggressive with his marketing using all means to push his brand.

“To widen my network, I formed several community self-help groups and gave each one of the 100 day-old chicks after I had trained them on best practices. The groups did well and today, they are serious poultry farmers. In fact, I buy all their eggs and hatch them. This is why I am able to sell chicks throughout at my farm.”

After seasons on investing the business has now broken even.

“In 2019, I bought two-acre plots within Ebukuya village where I have planted tissue culture bananas, kales, black nightshade and beans. I use the poultry wastes as fertiliser on my farm,” says Ambole.

Having learnt life the hard way, he has learnt to spread his risks and has diversified into other farming ventures to boost his revenue streams.

“At any given time I am selling something on my farm and I have never been broke again. I sell the bananas for between Sh700 and Sh1,500 since they are very big,” he says.

A while back, he started keeping rabbits and rears more than 200 breeds like California White, Flemish Giant, American Chinchilla and New Zealand white. He sells a month old-rabbit at Sh300 and two-month and above at between Sh350 and Sh500.

To multiply profits, he also slaughters the rabbits and sells a kilo of meat at Sh300 and fried at Sh450. He also collects the urine and uses it as fertiliser and pesticide on his farm. For top dressing, he mixes cow dung and rabbit droppings and put them in a sack and mix them with Mexico sunflower which he puts in mixture of urine and water mixed to the ratio of 1:2 a litre for 21 days.

He sells rabbit urine at Sh350 per 20-litre jerrycan and droppings at Sh500 per 50-kilogramme sack. His clients are local farmers who have seen the benefits of using the manure on his farm.

Experts agree that urine has nutrients that are beneficial to the soil, boosting crop yields.

“I do not regret leaving the US to do farming. Though I used to get paid well, what I am getting is enough for me and my family and I have peace of mind. I am self-sufficient and I thank God for blessing the work of my hands,” says Ambole.

Currently, the farm has 1,700 birds in different stages of growth, 215 rabbits, 15 pigs, three dairy cows that give him 20 litres of milk each per day and two and a half acres under bananas and passion fruits. For him, with farming, there is no limit.