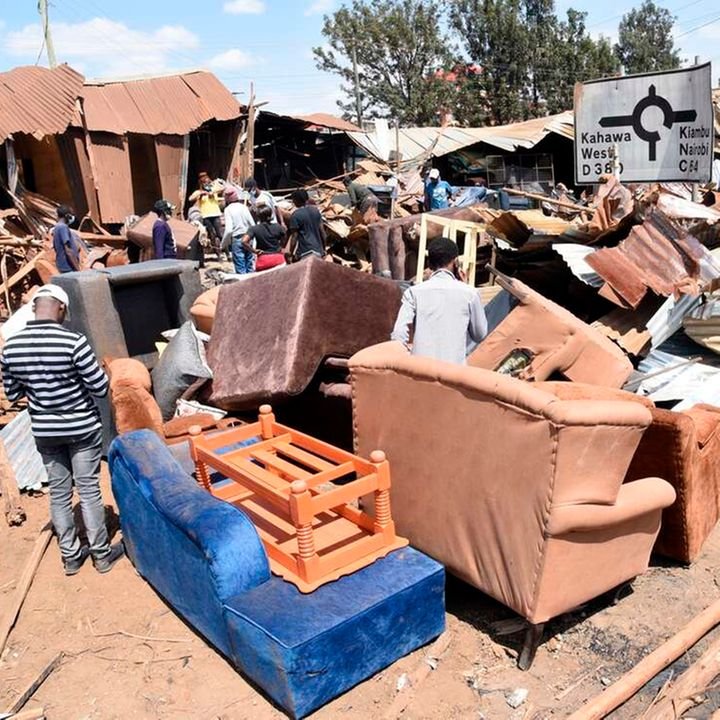 Dozens of traders whose stalls were demolished in Kahawa West on Wednesday have started rebuilding them.

Only this time a few metres behind a power line that they are using as the boundary between them and a road reserve.

When Nation.Africa revisited the scene Thursday, a day after the traders staged protests that claimed the life of 21-year-old Alex Macharia, men in overalls were seen drilling holes for new structures.

The traders, though yet to resume business, said they will stay put on the land that they have occupied for about 10 years selling furniture, building materials, clothes and food, among other things.

“We are in a dilemma seeing that no leader, including our MCA, has come in to address us on this, which begs the question as to who was behind the demolition. However, since this is the only place we have occupied for almost a decade, we are staying put,” said Joseph, who operates a furniture store.

“If the intention was to expand the road, one wonders why only a section of the roundabout was affected. How come other businesses that are clearly sitting on the same road reserve were left untouched? We would not be asking questions if they had demolished all structures occupying road reserves.”

Joseph said he lost about Sh800,000 in the demolitions as all the seats, beds and other items that were ready for collection were strewn apart by the bulldozer that flattened the stalls on Tuesday night.

“Had they given notice, they would have come in during the day and not at 1am like they did,” he added.

Mary, who runs a tailoring shop, said she had just stocked up new fabrics, which were torn and her steel rods brokenIn pieces

She said the dresses that were ready for collection by her clients are now in pieces.

“What will I tell them now and how will my children return to school after this mid-term break… Some of these businesses here are conducted by young men and when you chase them out of their only source of income, you are basically asking them to go and steal,” she said.

John Nderitu, the chairman of the affected traders, said they have occupied the space for 10 years without any trouble with the authorities except for a politician who they said occupies a road reserve opposite their location.

“We have therefore decided to rebuild some metres away from the road so that they don’t accuse us of occupying a road reserve. Any future demolition must be conducted fairly, including people occupying road reserves not just this space,” he said, lamenting that they had lost property worth millions of shillings.

The traders said they appreciate that a road is an important element of development and admitted that were it not for the road, their businesses would not have thrived as they had for years. However, they insisted that evictions must be fair.

“For example, we have a supermarket that sits on a road reserve and an MCA who has established a car wash and parking space just opposite our stalls. The sand traders have also occupied the road but their properties were not demolished. Is there fairness in that?” the traders wondered.

The traders blamed the police for the death of Mr Macharia, whom they described as a hardworking young man.

“He used to frequent the eateries that have been demolished for breakfast because he was an early riser. On this day, however, he was having tea as his tuk tuk waited in line when the officers advanced towards the area, forcing him to flee like other people. In the process, he was hit by a bullet and succumbed,” the traders said.

They added that the officers fired live bullets after one of their colleagues was hit with a stone by the protesters.

“They (officers) hit Alex and two others, who were rushed to hospital for treatment. Alex was shot twice at close range; we saw it happen. One bullet entered through his face and exited at the back and the other hit his neck,” they added.

The traders said they are angry and broken by the demolitions but will stay put because they depend on their businesses for their livelihoods and will not allow a public toilet to be built in the space.

“If they want to construct the road, let them come and say so but we will not allow any other person to bring their containers here, which we suspect is the cause for the demolitions,” they said.

Related Topics:Alex Macharia WanjikuNews
Up Next