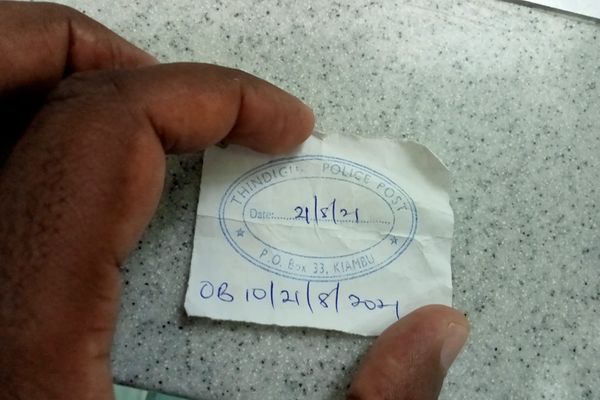 On August 21 this year, Charles Mbugua walked into a bar in Ndumberi, Kiambu County, to unwind after a hard day’s work.

Because of his political leanings, Mr Mbugua was also buoyed by a court decision that had just quashed the Building Bridges Initiative.

“I settled down and started imbibing my favourite liquor brand as I made calls to friends, exchanging usual banter and comparing notes,” Mr Mbugua recalled.

That day, he had left his car with a friend and was not in a hurry to leave the bar. The ambience was all he needed to cap his happiness.

“It was a perfect place for me… Without much to do, I just kept myself busy, scrolling through the mobile phone,” he continued.

Lingala classics were playing in the background, offering him a soothing melody as the night wore on.

“It was well past curfew hour and it proved difficult to get a cab back home. I just decided to continue enjoying my drink,” he said.

A few hours past midnight, two women walked in and engaged him in a tête-à-tête, offering to keep him company as the bar was almost deserted.

Unknown to Mr Mbugua, he had either been spotted by a conspiring bartender or was, in military slang, a soft target.

“Being tipsy, I might have made a series of blunders and eventually paid the price,” said Mr Mbugua, amid hearty laughter.

The scheming duo easily ensnared him and spiked his drink. He remembers little after waking up from a deep slumber.

When Mr Mbugua sobered up, he noted that he had lost his phones and he decided to check his bank accounts. That’s when he realised that he had been robbed.

He wrote to Nation.Africa recently, saying: “I have just read an article on the Narok farmer who was drugged and Sh800,000 stolen. I am also a victim. I was drugged and lost Sh500,000 from my local bank account, Sh10,000 from mobile money, Sh73,000 from another mobile banking transaction and two iPhones 11 Pro Max.”

He says that he qualified for a Sh150,000 overdraft, but the thieves were able to transfer Sh200,000 to another account under the same bank, and transferred Sh70,000 in mobile money to at least five mobile phones each, making it Sh500,000 from the bank.

“In total, I lost Sh900,000. The case is under investigation at DCIO Kiambu but what surprised me is the way they logged into my local bank account and stole the money,” he said.

“I strongly believe since I have learnt of a similar incident with the said bank, please enlighten Kenyans not to follow in this grave trap.”

He shared with Nation.Africa the M-Pesa and bank statements to back up his claims.

Investigators were able to retrieve CCTV footage of what happened on the fateful night, and Mr Mbugua is still at loss why the culprits have not been nailed.

“The investigations were promising but the case has grown cold…I’m still wondering,” he said.

Six of his friends, he disclosed, had fallen victim to the scheming women, who have also terrorised revellers in the Kasarani area in Nairobi.

Meanwhile, some bar operators in Naivasha have been urged to instal CCTV cameras in their outlets, with the police keen to arrest a group of fraudsters.
Several people have fallen victim to the spikers but police are yet to apprehend them.

“It is a big cartel and unless the actors are arrested and put behind bars, revellers will continue to suffer,” Mr Mbugua maintained.

READ ALSO  Why I hid my Luo roots: Otile Brown

He said the con artists have been moving from one town to another, identifying targets and striking.