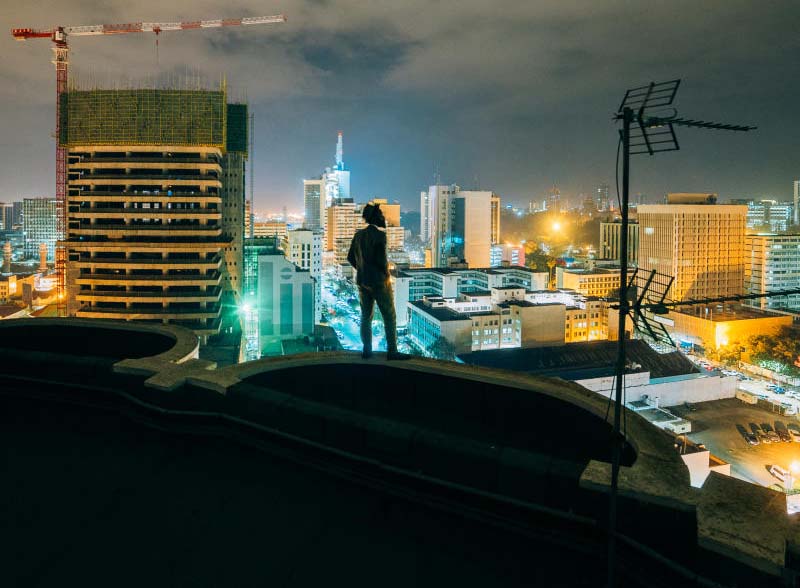 Mutua Matheka is not your usual photographer. You probably know him from his architectural photos taken from the top of Nairobi’s tallest buildings as he risks life and limb to pursue his passion.

A graduate of architecture from Jomo Kenyatta University of Agriculture and Technology, Matheka has captured not only Nairobi’s cityscapes but has travelled to 13 cities in 10 Southern African countries in order “to disrupt the narrative about urban Africa.”

“Mutua Matheka is an artist. Period,” he says. “At the core, all I want to do is create art and share that with the world and be part of communities that value art.”

Matheka’s dreams of changing the social narratives through art began in the undulating hills of Mumbuni, Machakos. He was born there. Then he followed his mother who was a teacher at Machakos Teachers College. Then on to the hills of Kaliluni where his mother was a headmistress before settling in Katelembu.

“Life was good in the village where everyone knew everyone else. Here, I could not afford to develop a fishy character because someone who knew my parents would see to it that I paid for my sins,” he says.

As a 10-year-old lad in Class Six, Matheka dreamt of being an architect. He did well in school to make the dream a reality. At JKUAT, he enrolled for a degree in architecture and interned at several firms as a First Year student.

After graduating in 2009, Matheka got a job with the interior design firm, Image 360, staking it out for two years before quitting to focus on photography.

At the firm, Matheka struggled to balance his day job and his passion for photography. He would wake up by six in the morning to be in the office an hour later. He would spend the hour before work to blog, work till lunch break when he would once again indulge in his passion.

Late into the evening, long after the family had slept, he would continue with his photo compilations until 2am. A few hours of sleep and Matheka would go through the routine the following morning. In the words of former politician John Michuki, Matheka was trying to “juggle a liver”.