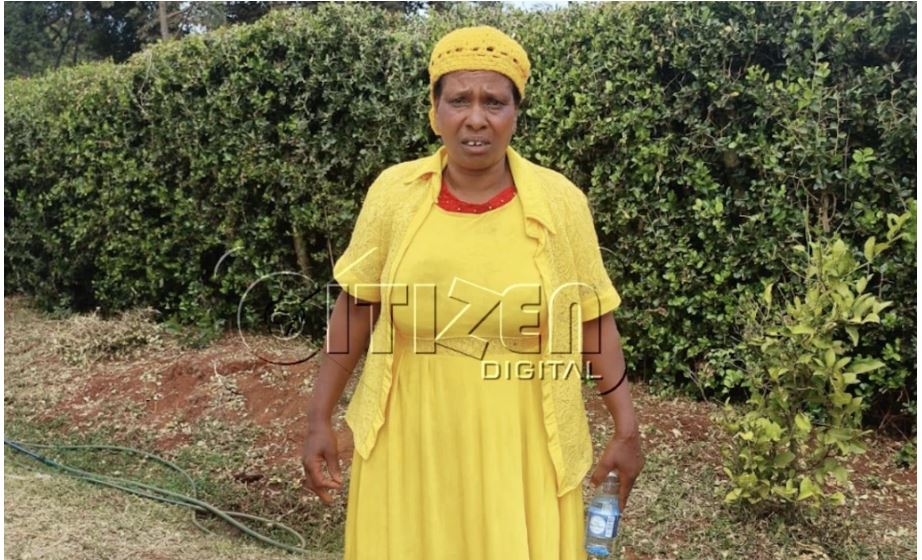 A Nyeri woman who stopped President William Ruto’s speech and demanded Ksh.400,000 says she did so, so she could send her 37-year-old son there to work as a driver.

As President Ruto was speaking, a woman, later identified as Lucy Wangui, came forward shouting that she needed to see him and First Lady Rachel Ruto immediately because she was inconsolable and had even considered committing suicide.

The woman, who was yelling and prostrating, stopped the proceedings while the president, who was present for Jack Reriani, brother of Deputy President Rigathi Gachagua, calmly handled the matter.

This forced the First Lady to rush to her as security managed to drag her outside the tent and the President continued with his speech.

Later, Wangui, dressed in yellow, gave an explanation for her dramatic conduct, stating that she needed the head of state’s assistance.

“I came to seek help from President Ruto as my son wants to go abroad. I was requesting him to help me with Ksh.400,000 so that he can leave” she said.

“My son is a tout at the 2NK Nyeri stage and has three kids; two in secondary and one in primary (school). Due to financial constraints, they are constantly being sent home for school fees” she added.

She continued by expressing her dissatisfaction with life and her loss of hope due to the fact that she and her son, John Kairo Gichuhi, cannot make ends meet with what they earn..

“I came to seek help as he is my last resort. I was so frustrated to the point of attempting suicide.”

“I am employed at Chaka and I earn Ksh.10,000. If I divide the money with them, it can barely sustain our needs. That is when I decided to seek the President’s help for my son to go abroad so that he can help sustain us.”

The woman has high hopes for her son and notes that his travelling abroad would make life more comfortable for them.

READ ALSO  How I survived, healed, and thrived after an abusive marriage

“My son has been invited abroad by his cousin where he can work odd jobs such as driving as he was promised a salary of Ksh.70,000. The money would enable him to take care of us and educate his children.”