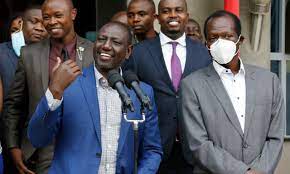 Deputy President William Ruto together with his running mate Mathira MP Rigathi Gachagua has been cleared by the  Independent Electoral and Boundaries Commission (IEBC) to run for presidency in the coming elections.

Ruto is one of the 11 candidates that complied with the Commission’s regulations, seven of whom are independent candidates.

Speaking after the clearance, the second in command said his Kenya Kwanza alliance has faith in the IEBC and calls on other electoral agencies to ensure fairness and transparency in the elections are achieved.

“We will overcome all the hurdles like the so-called “system and deep state” but we want fairness to rule. I want to condemn those planning to rig the presidential debate to either stop or come up with a debate for their preferred candidate. We want to tell our opponents that there is no chance to rig because we are vigilant, every vote will be counted, and the decision of voters must be respected,” he said.

He said his bottom-up agenda has the scheme to save Kenyans from the hunger ravaging the country.

“Kenyans can hardly afford a meal on the table, everything has gone up including salt, cost of living in Kenya is unbearable and Kenya Kwanza has a plan to resolve the situation,” he added.

Ruto said his government will focus on labor incentive projects and will not depend on the loans burdening citizens to run the government.