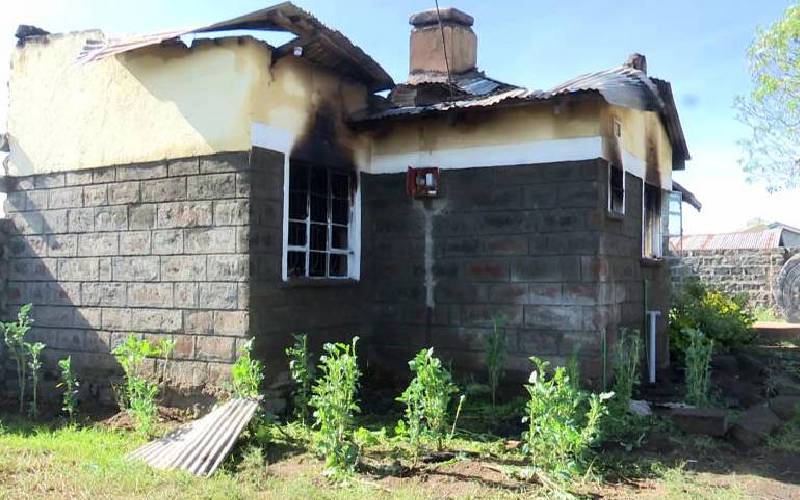 The National Police Service has pledged to support a Nakuru-based police officer who lost three children and a house girl in an inferno over the weekend.

Inspector General of Police Hillary Mutyambai on Tuesday said it is with profound sadness and a heavy heart that the said officer PC Mary Migwi had lost her three children and a house-help in the incident.

Migwi is attached to Miti Mingi police post in Gilgil but resides in Nakuru Town East.

The family had moved into the house in which the accident occurred three days before and the cause of the fire is yet to be established.

The three children have been identified as Leah Njoki 10, Teresiah Wanjiru 7 and Mildred Agal 2 who were under the care Mary Wairimu 18 all of whom perished in the fire.

The IG regretted that the accident happened when PC Migwi was on duty at her station.

“This regrettable tragedy happened when the said officer was on duty and as a result claimed the four lives. This is a difficult painful experience for the officer and my prayers are with her and her family,” the IG posted on his Twitter.

He added, “I extend my support to ensure the officer is settled and offered the necessary psychological assistance. The NPS is committed to addressing the welfare of police officers and their families”.

Take a quick survey and help us improve our website!

Speaking to The Standard, Nakuru County Police Commander Beatrice Kiraguri said that a post mortem was conducted on Tuesday and the bodies positively identified.

Kiraguri said that they were already giving the officer psychosocial support ahead of the burial slated for later this week.

“The house-help will be buried at her home in Miti Mingi Area on Thursday. Plans to transport the remains of the three children are underway and they shall be buried in Karatina,” Kiraguri said.

Kenyans took to social media to convey their condolences to the family wishing solace for the officer.

“May the Lord give this mum strength and comfort. I imagine myself in her shoes and my stomach hurts. May their souls rest in eternal peace,” wrote Julie Awange.

“As a parent, I honestly don’t know what I would become if I face such inconsolable tragedy. That mother needs every available support,” wrote Anthony Ngige.