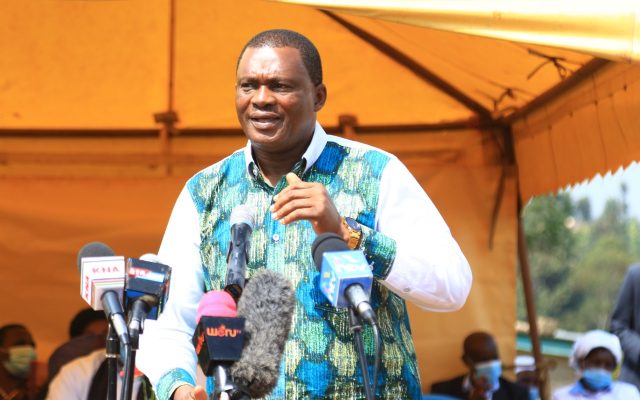 National Assembly Speaker Justin Muturi on Saturday declared his interest in vying for the presidency in the 2022 General Election.

Mr Muturi, who was recently crowned spokesperson of the Gikuyu, Embu and Meru Association (Gema), did not specify the political party under which he will vie.

He noted that he has a wealth of leadership experience so leading the country will be an easy task for him.

Mr Muturi asked the leaders to pray for him so that he can take over from President Uhuru Kenyatta.

Regarding his coronation at Mt Kenya spokesperson at Mukurwe Wa Nyagathanga Shrine in Murang’a County, he said the major task of uniting all of the region’s leaders lies ahead of him.

“Being a spokesman is not enough. I also want to be the President,” he said to applause.

The Speaker said his vision is to restore discipline and order in the management of government resources in order to grow the country.

“I want to be the President so that I can achieve my vision of transforming Kenya for the betterment of all Kenyans,” he said.

He said Kenya is a good country with the potential for massive economic growth hence the need to restore dignity and integrity in management of its resources.

Mr Muturi disclosed that he had turned down advice by some politicians from the region to go for the Deputy President’s position.

READ ALSO  Moses Kuria: I May Not Know Where I Stand, but I Will Never Join Azimio

“I am clear about what I want to achieve. This country should be led through discipline and order and I’m the person who can do that. I can’t change Kenya while number two,” he told the leaders.

The Speaker further said religious leaders are his best ambassadors in the region and asked them to continue supporting him.

Regarding his support base, he said: “I have gone to several places … people are embracing me.”

Mr Muturi said he will visit every part of the country to woo voters.

“I will go to the whole country to tell Kenyans about my political ambition,” he said.

The church leaders threw their weight behind Mr Muturi and told him not to give up his presidential ambition.

They asked Mt Kenya East politicians to rally behind the Speaker due to his good leadership.

They said it is time for the area’s leaders to back one of their own in the bid to take over power.